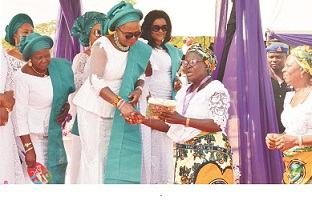 By Mary Agidi
|
In a clear departure from the trend of giving awards to political bigwigs in the society, the Foundation for Wives of Ondo State Officials, FOWOSO, honours young girls, successful entrepreneurs, and philantropists who have distinguished themselves with their skills and talents.

The dinner and award night ceremony held at the international event centre, The Dome, Akure the state capital as part of activities for the ongoing second FOWOSO Summit, also featured musical performances by young artistes.

The awardees were, Miss Marvelous Jegede from Arigidi-Akoko who built and installed solar panel in her family house after attending the 2018 BEMORE Summer Bootcamp for Girls naija, and Miss Funmi Akeremale the youngest breast cancer advocate who had in so many occasions enlightened people on how to conduct breast self-examination for early detection.

Also, another BEMORE girl, Miss Seun Elebimoyo who was nick-named Nigerian Celine Dion during the 2019 bootcamp, due to her display of musical talent was also given the award.

Successful entrepreneurs like Olori Akinlosotu, a widow who participated in FOWOSO training and has since been making shoes was also awarded as the Face of FOWOSO Empowerment, while Mr. Samuel Ozokwereobi, who composed the FOWOSO anthem was awarded as a Champion of Humanity.

A young female poet, Miss Chisom Ezugwu who Mrs. Akeredolu discovered through the social media was also honoured after she thrilled the audience with her poem, ‘Who am I’?.

Meanwhile, the governor of Kwara state, Abdulrazaq Abdulrahman was honoured as the most outstanding He4She Governor for 2019; he had received same award during the National Women’s conference organised by the Committee of Wives of Lagos State Officials, COWLSO in October 2019.

A Posthumous award was, however, given to Late Mrs Tiwalade Ogbesetore, wife of the Caretaker Chairman of Akure North local government, who Mrs. Akeredolu described as a virtuous woman who contributed passionately to the mission of FOWOSO in her life time.

Some of the dignitaries in attendance commended the effort of the wife of Ondo state governor, the founder of FOWOSO for touching the lives of women with new approach through different initiatives.

Wife of Ekiti State governor, Erelu Bisi Fayemi commended her and affirmed that the best and only way to justify the office of the First Lady is by reaching out to the less privileged and promoting the course of women and children.

Chief Lucky Ayedatiwa on his part, noted that prioritising the health and welbeing of women is a means of stabilising the peace in the family, and therefore pleaded with men not to leave the task of home building to women alone.

The Chairman of the Ondo State Universal Basic Education Board, SUBEB, Princess Oladunni Odu described Mrs. Akeredolu as a blessing to the state, stating that she stands out with impactful, educative and developmental programmes for women and children.