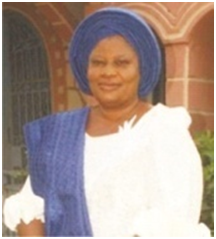 By Mary Agidi
|
The remains of the late wife of the caretaker chairman, Akure North Local Government, Mrs. Tiwalade Ogbesetore was laid to rest during the weekend.

She was buried after a funeral service held at the Akure North Local Government Secretariat with many dignitaries including Ondo state, Governor, Arakunrin Oluwarotimi Akeredolu, his wife, Betty, state executive members and others in attendance.

Akeredolu, who extolled the virtues of the deceased admonished the husband, Bankole Ogbesetore to be courageous and take heart over her wife’s death, urged him not to be depressed but rather accept it as the will of God.

He noted that there is no armour against fate and however prayed against recurrence of such in the family and Ondo state at large.

In her tribute to the deceased, Mrs. Akeredolu described her as a team builder personified, saying she will be missed by the FOWOSO family.

Earlier, the officiating minister of the Prayer Centre Church of God, Pastor Felix Aluko described Late Mrs. Tiwalade Ogbesetore as a devout Christian who did not take sanctuary’s work for granted.

He noted that our time on earth is too short and we should therefore live every moment in preparation for death.

The cleric urged every individual to render good service to humanity in whatever position they occupy while on earth.

The deceased, 55, until her demise was the head of Guidance and Counseling Unit of Fiwasaye Girls’ Grammar School, Akure, and was survived by her husband and four children.