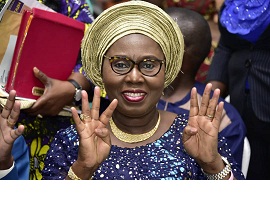 By Mary Agidi
|
In commencement of the second summit of the Foundation of Wives of Ondo State Officials, FOWOSO, a family game tagged ‘Ondo State Crawlers Race Competition’ was organised for families selected across the 18 Local government areas of the state.

The programme which was held at Adegbemile cultural centre , featuring couples and their children, was aimed at promoting unity in the Family.

In her keynote address, the wife of the state governor who initiated the programme affirmed that the competition was conceived to spice up the second FOWOSO Summit slated to commence today 4th to 5th December, 2019 at the international culture and event centre, The Dome, Akure.

She stated that what the Crawlers race intends to correct was a true reflection of what is happening within families in our society.

According to her, the Crawlers race which targets babies within the ages of 8-11 months was the first of its kind in Nigeria to promote joint parenting and love in the family.

Earlier, the chairperson of the competition, Mrs. Oluwatosin Oladipupo, noted that the role of parenting was challenging and it was observed that men have abandoned the task to women alone, hence the reason for the Crawlers race competition in order to bridge the gap.

She stated that men are often times less concerned with parenting , especially at the early child development and this can reduce the quality of parental care a child receives and can have negative social, emotional and economic impacts on a woman.

She added that the Crawlers race was to foster co-parenting among couples and reduce the number of absentee fathers in the society.

The race which was in two stages has stage one performed across the 18 local government headquarters while the second stage was scheduled to hold at the state capital.

The second stage has 18 participants who were winners of the first stage from all the local government areas of the state.

They were divided into six per group and the first position from each group would compete for the final competition where overall winner would emerge.

To discover the closeness of the fathers of the babies with their families, they were made to co-ordinate the start of the race by encouraging their kids to move along the lines and join their mothers on the other side.