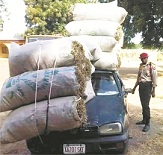 By Bayo Fasunwon
|
Many times, I have boarded motor bikes (Okada) and vehicles as means of travelling from one point to the other. In these journeys, I have heard the drivers raining abuses, insults and sometimes curses on uniformed men. While the men of the armed forces are seldom evil spoken of, the Police and VIOs have more than enough of these verbal assaults to such an extent that you would not want any of your family members to don these uniforms. Lesser victims, though not spared, are men of the Federal Road Safety Commission (FRSC).

Many times, I do wonder why the Road Safety officials come under minimal but uncomplimentary verbal and sometimes murderous assaults. In my interrogation of this phenomenon, I discovered that while they are guilty of taking bribes, no innocent road users have ever been victimized. Often times, those who are booked are law breakers, and these seeking for a safe landing prefer to part with little sums of money than pay the heavy fines which their offences rightly deserve. Whichever way it falls, a bribe is an offence committed by the giver and the taker, and is punishable by law. I have also observed that these FRSC officials are also hated for doing their jobs at all. From my point of view, these men are our misunderstood friends.

The incessant carnage on Nigeria’s unworthy roads necessitated the creation of the FRSC in 1988. This body was initially created to reduce the loss of lives and properties which resulted from road accidents. Only families of victims of road accidents could tell the pains and agonies they have and are going through due to avoidable accidents on our roads. Many people have been maimed for life, while some have become bedridden, undergoing expensive treatments due to carelessness of government and other road users.

The FRSC was created to prevent and reduce these agonies as much as possible. In order to achieve this, they were expected to educate motorists and members of the public on the importance of discipline on the highway, clear obstructions on any part of the road, design and produce drivers’ licenses to qualified road users, conduct researches into the causes and preventions of motor accidents, and also make regulations in pursuance of any of the functions assigned to the Corps. Furthermore, they are empowered to regulate the use of sirens, flashers, and beacon lights on vehicle, provide roadside and mobile clinics for the treatment of accident victims, without charge, regulate the use of mobile phones by motorists, regulate the use of seat belts and other safety devices and also regulate the use of motorcycles on the highways. The functions of the FRSC cannot be exhausted in this write up, but can be sourced from their websites and on the internet.

A cursory look into these functions presents an organization put in place to safeguard lives and properties of all road users in Nigeria. Then why do we hate them? Given my experience, for example, I do not need to see an FRSC official before I use my seatbelt. I have been involved in accidents on two occasions. I was a passenger in a car that had a burst tyre on the highway. The vehicle somersaulted thrice, and I was flung out of the vehicle and landed on the highway in the process. Those who had their seatbelts on remained safe in the vehicle while I soared high and landed hard. On another occasion, having learnt my lesson, it was the seat belt that kept me safe from being pushed out through the windscreen when our vehicle had a head on collision. So FRSC or none, my seatbelt is not negotiable. At another time, a friend of mine who was going for an examination was ‘arrested’ for booking by the FRSC officials. His offence was that while riding his bike, he had no helmet. Given that he was going for an examination, I pleaded passionately on his behalf. He told me that he has a helmet at home, but finds it a burden to use. My pleas were accepted and he was released without a bribe. Some few months later, I was informed that this young man had died, without seeing the result of the examinations he wrote. The cause of his death was an accident on his motorbike, and he hit his head on the concrete. Another known person had died with his entire household due to over speeding, while some died while trying to avoid FRSC officials.

Nigerians are generally haters of the law. We find it burdensome to abide by laws made for our good. I think we ate the larger part of the forbidden fruit. Many drivers do not have licenses, bikes do not have plate numbers and their riders are without helmet. One bizarre attitude of motorbike riders is to tilt their headlamps towards the sky, and mount blinding lights on their bikes, with music blasting from those bikes. They have trained themselves to always overtake on the wrong side, and carelessly too. The lawlessness of Nigeria’s road users has created an avenue for FRSC officials to take bribes on the roads. When they decide not to take bribes, the booked errant road user perceives them as enemies and fiends. The punishment for these ‘James Bond’ and lawless road users through bookings is meant to act as a deterrent against road violations. When a fine is given, money could be sourced, but when lives are lost on the platform of generosity, such can never be replaced. In the early days of the Road Safety, when their vehicles are ahead of you, one dares not overtake, as such would mean that you have exceeded the speed limit. Then, when you commit an offence in Lagos, you are asked to go to Abuja, watch a documentary on road accidents, and pay your fine, but these have been reduced now, with fewer results. To avoid their fines and embarrassments, know the rules and keep them. The FRSC is your friend, if you obey.

However, the FRSC is shirking some of its responsibilities. I have noticed that road signs are becoming extinct on our roads; FRSC should wake up from their slumber and ensure that necessary road signs are in place, and conscious road safety education is carried out at all educational levels in Nigeria, including motor parks and selling points of Motor bikes and vehicles. Furthermore, it is their duty to inform States and Federal Governments on the state of the roads, so that necessary agencies could carry out necessary repairs and prevent life losses through gaping potholes.

All forms of road obstructions (vehicle carcasses, broken down vehicles, stones etc) should also be consciously cleared from the roads. They should also be cautious and courteous in their interactions with road users.  Finally, the FRSC should also weed out the bad eggs amongst them so that their image would not be dented.  As you use the road henceforth, be a safe user. May our rough roads be smoothened, and may we arrive safely at our intended destinations. Obey traffic rules, do not use mobiles while driving, and remember that FRSC is a friend indeed. Drive safely, your family is expecting you. Safe journey!!!