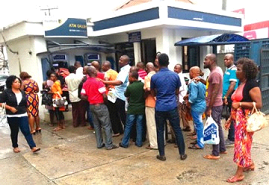 About 48 hours to the Christmas celebration, bank customers and depositors are expressing frustration over their inability to withdraw from money deposited with their various banks. The Hope investigations revealed.

The Hope was at various banks, within and outside Akure to monitor the situation.
At most of the banks visited by The Hope, many customers were seen in large crowd outside the premises waiting to be attended to while many others besieged the ATM stands with very few machines working

Apart from the usual unavailability of cash in the ATMs, which has left customers with no other alternative than to patronise Point of Sale (POS) operators, it was discovered that customers were being short paid inside the banking halls.

Those who needed money to buy food items for their families and traders that wanted to buy goods to sell for the festive seasons were seen lamenting at various banks
Speaking with a customer, he said “I was in the bank yesterday with a cheque of N700,000 only for me to be given as low as N200,000, I had a short payment of N500,000.”

Another customer said “someone was to collect N500,000 yesterday, the bank only released N150,000 to him, I don’t know exactly what the problem is in this country, it has gotten to the point that as a Nigerian, we just have to manage.”
Also, another customer said “there are indications that the government is trying to encourage electronic transaction and this probably accounts for the reason behind the scarcity in cash flow.”

Mr Adewale Ademola, who said he left home as early as 6.00 am to beat crowd of people who might besiege the ATMs, said he was disappointed to found the machines not dispensing cash.

Adewale disclosed that despite the promise of the bank to get the ATMs working, nothing was done for over three hours
Meanwhile, POS operators seemed to be having a swell time as frustrated bank customers have turned to them as last resort to get money for their use.
When asked how he was able to get money for his customers, a POS operator, Ganiyu Kazeem said he went to borrow money from somewhere else as the banks told him there was no cash.

Another POS operator along Fiwasaye Road in Akure told The Hope that he got money from the bank by ‘tipping’ one of the staff.
Meanwhile, a source within one of the banks confided in The Hope that it was the usual practice towards the end of any year for the past few years.

According to him, it was the practice for banks to wait for those, who had taken loans from them, to redeem their debts so that they could return depositors’ money.
Another bank official said “this is not only peculiar to our bank, it is everywhere. Infact, the maximum amount you can withdraw now is N50,000. It is a general challenge across all banks.”

Report from the neighbouring Ekiti State revealed that bank customers in the state were also lamenting over what they described as scarcity of cash across commercial banks operating in the state, especially in Ado-Ekiti, the capital city.

A Senior Civil Servant at the Ekiti State Boundary Commission, said he was in the banking hall for almost six hours to withdraw money, but was later advised by one of the bank officials to go to the POS operators after waiting for several hours.
He alleged that bank officials were deliberately sabotaging their ATMs, but called on the government as a matter of urgency to intervene into the matter.