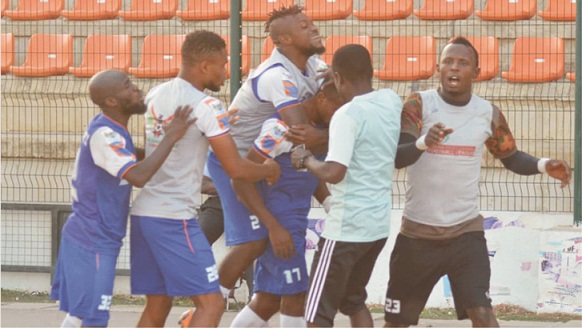 By Femi Atolagbe
|
Sunshine Stars FC Akure recorded their first home win in 2019 NPFL match week 6 as they played host to Remo stars of Sagamu at the Ondo state Sports complex in Akure the state capital .

Fuad Ekelojuoti was the star of the match as he scored twice for the home team in both half of the south west derby .

He had headed home from Seun Shogbesan’s free kick in the second minute of the tension soaked derby before Akpojuvwevwo Bright made it 1-1 in the 5th minute with a header from a corner kick.

The dazzling petit, Fuad separated the team in the 57th minute when he tucked home rebound from Alaba Adeniyi  .

The South West derby ended in 2-1 in favour of the home team .

Head coach of Sunshine Stars Kayode Julius at the post match interview said, “we give thanks to God and we really appreciate the people of Ondo state for their support. The players and the management team have been spectacular”.

“If you look at our record, particularly our away record, it has been wonderful. With our next game in far away Minna, we are sure of victory.

“In Nigeria, home game is more difficult than away games, because ordinarily you are expected to win at home coupled with the fans pressure.

“As you can see the players were under intense pressure, because we have not been winning at home and we also played against a coach who was once in charge of the team but we give thanks to God that we won this evening.

I won’t tell you lies, Boboye knows the in and out of the team as well as the state. But not withstanding when we get into the dressing room we are going to work on our lapses ahead of next march”, he concluded.

Remo’s coach Kennedy Boboye congratulated his former team for their determination to win the game which they did achieve, saying he will work on the chances rued by his boy in their next match.

“The officiating was fantastic, I pray they continue throwing matches open like this” ,he concluded .

With the winning, Sunshine Stars still maintained on beating record this season with two outstanding matches at hand.

Meanwhile the  commissioner for youth development and sports , Saka Yusuf Ogunleye has commended the brilliant display of sunshine stars players in a week 6 elite league tie against Remo stars.

Ogunleye in a release made available to newsmen immediately after the encounter identified determination and team work as the vital components that gave the 2-1 victory for the Ondo state sponsored side.

He reiterated Arakunrin Akeredolu’s commitment towards sports development in the state as well as better welfare package for sunshine stars players and officials.

He charged the players not to be complacent in subsequent matches, assuring them of the state government’s total support.

Sunshine Stars could be recalled are yet to lose a match this season having picked eight points from four matches to go on top of group A with two outstanding matches.

Sunshine stars next match is against Niger Tornadoes in Minna on Thursday.