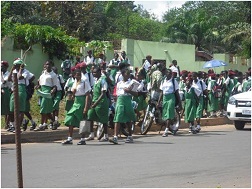 Most schools in the state are currently writing first term examinations for the 2022/23 academic session.

The Hope gathered that many of the students and their teachers get to school late while some have to trek far distances due to exorbitant fares charged my commercial motorcyclists and drivers.

Some private schools have stopped picking pupils with the school buses while those that still do buy fuel at exorbitant price.

One of the affected teachers lamented to The Hope how he had to buy petrol at N300 per litre after queuing for hours so he and his children coule get to their various schools.

“At the same time, students are affected. I cannot punish them because I understand what is going on in town; there is no fuel.

“Even for the parents to pay school fees now is not easy because of the fuel scarcity. Some of them are commercial drivers and they are unable to get fuel to work.

Another teacher, who simply identified herself as Mrs Adeleye I’m so sad the current fuel scarcity in the country affected both the students and the teachers.

She said the amount of money she spent going to work are doubled and many times she will get to work late because of the traffic jam caused by motors killed by the roadside waiting to buy petrol.

One of the parents Mr John Chukwudi complain that he had to work with his kids to school because he could not get fuel to transport them.

He added that his children were writing exams and he could not afford to let them sit at home, adding that added extra money for them to board cabs back home.

Another parents, Mrs. complained to The Hope that her children only go to school on days that they have exams to write and as soon as they’re done, they will stay at home till the graduation day should the fuel scarcity persists.