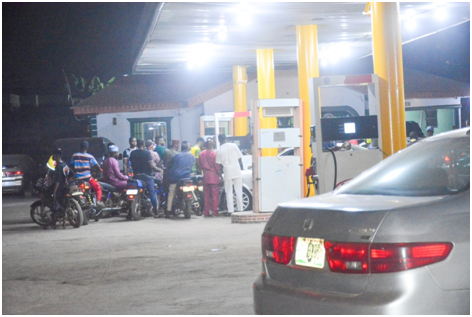 Queues have resurfaced at filling stations selling petrol in Akure, the Ondo State capital as motorists are finding it difficult to get the product.

When our reporters went round the city yesterday, a handful of the filling stations opened for customers as majority of them were shut.

It was gathered that for some weeks, queues for petrol in filling stations in some major cities in the country such as Abuja and Lagos have been appearing and disappearing.

Our reporters however gathered from some marketers that there have been disruptions in supply and that the current queues in Akure might not be unconnected with low supply and panic buying.

Some of the motorists who spoke with our reporters lamented over queuing for some hours before buying the product.

One of them, Mr Femi Ilesanmi who expressed displeasure over the situation, blamed it on hoarding of the product.

“I do not know why the stations suddenly stopped selling. I still bought fuel on Tuesday but today (Thursday), I noticed majority of them were not selling.

“This is why I joined this queue to buy fuel,”  Mr Femi said.

Another private vehicle owner simply identified as Komolafe said, “I wanted to purchase the product around the FUTA axis but all filling stations visited were under lock. I was later able to buy along Ondo road.”

Efforts to speak with some of the gas stations owners proved abortive as they were evasive.

It would be recalled that fuel scarcity started in Lagos and Abuja shortly after reports that adulterated PMS was imported into the country, leading to damage of vehicles.

It was reported that  the bad product was still at the various depots and filling stations, thus delaying distribution and storage of new product coming into the country.