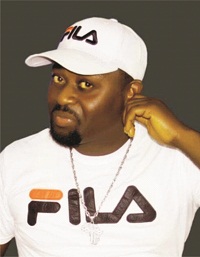 By Kolawole Bamidele
|
A popular musician, Solomon Taiwo popularly known by his stage name ‘Taye Turaya’, has said his aim is to become a great artiste that would touch people’s lives both at home and in diaspora.

The artiste during an interview with Friday Extravaganza said that he started singing in his church at his early age and came to limelight in his secondary school days. He  said that he has been to all the 36 states in Nigeria.

Taye Turaya who hails from Erin Ijesa in Osun State, but born and brought up in Ikare Akoko in Ondo State noted that he has been singing professionally since 25 years.

According to him, he did not chose music but music chooses him, saying the love and the passion he has for music made him to go far.

The artiste stated that the ideas and inspiration began from the church he was attending then and his talent came from God.

Taye Turaya who is a graduate of Business Administration from Rufus Giwa Polytechnic, Owo and Management Studies from Adekunle Ajasin University Akungba Akoko, said that he has been able to release 15 albums.

He mentioned his mentor to include King Sunny Ade, Segun Adagunodo (Santana) and Yinka Joel Ayefele, saying they are good leaders to follow and that he is still loyal to them.

He noted that there are numerous challenges that faced him  but he survived them, saying he is still surviving.

“I’m always glad when I sing or listen to music because it has been part of me.

“I have been to all the 36 states in Nigeria including the FCT. I have also been to the United Kingdom, and about 10 states in United States of America such as Chicago, Michigan,  Indianapolis, Maryland, Texas, New York City, New Jersey, Connecticut, Atlanta Georgia and Florida, I have been to South Africa, Malaysia and all West African Countries.

“Kudos to all our producers and marketers for they are always  there for us even at this time when the level of piracy is alarming, they are still doing a very great job.

“I will use this medium to appeal to all those involved in piracy to please quit this  unlawful attitude so that we can enjoy what we have laboured for,” he pleaded .

In his words, he rehearse at least an hour daily so as to upgrade himself in his chosen career.

He urged upcoming artistes to stay focused on their different types of talents, adding they should keep on moving everyday because there is a lot of gain ahead.

‘How I overcame stage fright’