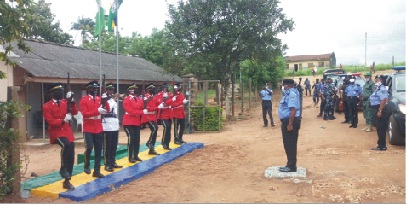 It was a moment of joy as men and officers in the Ondo state police command trooped out to welcome the Commissioner of Police, CP Bolaji Salami during his familiarisation tour to all the area commands in the state.
The tour was to lift the spirit of community policing which is one of the cardinal programmes of the Inspector General of police, IGP Abubakar Adamu, and also to reform and reinvigorate community policing philosophy for purpose driven impact and to see the police in new light.
Commissioner of Police Salami started the tour in Ala Area Command at Oba-Ile where some senior police officers like DCA Joseph Akinyede and Assistant Commissioner of Police Administration, ACA Rose Chollon solicited for the support of all officers for effective policing, urging them to discharge their duties in protecting lives and property at all times.
His words: “I want our communities to assist the police as they have been doing. If we are waiting for government to build police stations, and do other things, it may take some time.
He also advised police personnel to be civil to the public and do their job diligently, saying they should not be overzealous nor overdo things.
” In performing your duties, don’t be found wanting because two wrongs cannot make a right as proactive measures will be put in place in ensuring peace in the police command.
” The officers should not be tired of correcting their men. Everybody is important and we should work together. Let us assist one other, so that, we can have a peaceful society,” he advised.
The commissioner promised that the command would look into other challenges mentioned by the Area Commanders.
He further extended his tour to the Northern part of the state where he met with the traditional rulers and asked for their blessing. He noticed that the area was prone to kidnapping, robbery and all other kinds of criminal activities.
The commissioner noted that the communities are in the border part of the state with Ekiti and Edo states and could bring in a lot of criminal activities into the state.
He further assured that during this political period, the Nigeria police will be fair to all parties as the police force is not interested any politics.
The first port of call for the Commissioner of Police to the Northern part of Ondo state was Iwaro Area Command, in Akoko South West, where members of the Police Community Relations Committee (PCRC) and men of the command welcomed him with enthusiasm.
The traditional ruler, Oba Yusuf Adebori Adeleye canvassed for more manpower in the Area Command as it would ease community policing.
” He gave assurance that his community would work hand in hand with the Ondo police command in bringing peace to the area.
The Olubaka of Oka kingdom, Oba Yusuf Adebori Adeleye appreciated the CP for his visit, and assured him of his support, saying this will go a long way in helping the community and the state at large.
“My community will work hand in hand with the police command in this area command in ensuring that the work of the police is made effective and efficient.
“We want the area command to be more proactive by having mobile stations at strategic points in the community which will curb the rate of crime and kidnapping in our community.”
He visited the Olukare of Ikare, Oba Akadiri Momoh who appreciated the CP’s visit as he acknowledged that his men in the area command were working round the clock to curtail crime in the community and promised to support the Ondo State police force.
Moving to Southern senatorial district of Ondo state, the Abodi of Ikale lauded the CP for handling the political crisis in the town with maturity just within a week of resumption in the state. He stressed that the area was having capable officers in the Area Command.
“The monarch who told the police boss about the invasion of his domain by herdsmen, called on the CP to find a lasting solution to the issue in the community.
He urged the CP to reinforce his men in the area to curtail the growing assassination, robbery and kidnapping in the community. He commended policemen in the area command on their efforts towards locating the missing man from Ago- Alaye who went to his farm on his motorcycle but have not been found till date.
He also mentioned another Ikale man who was brutally murdered at his duty post and urged the police to nip the issues in the bud.
At Ore Area command, men and officers were in high mood when welcoming the CP.
The area command made modest achievements in curtailing the activities of criminals.
Despite the constraints associated with policing in the area command, the rank and file officers have resolved to focus and perform their duties without favour or bias.