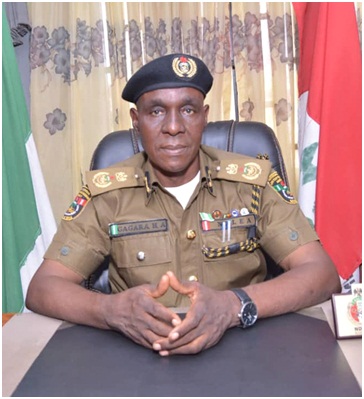 The Ondo State Command of the Nigeria Drug Law Enforcement Agency (NDLEA), has confirmed the death of the state boss, late Commander Haruna Gagara.
Gagara, The Hope Metro authoritatively gathered passed on during a brief illness at the age of 59.
The Public Relations Officer of the Command, Superintendent of Narcotics Mr Ekechuku Wilson, confirmed the death to our correspondent on phone.
Wilson said his late boss who was born in 1962, hailed from Lantan Local Government Area of Pleatue State.
He further described Gagara as a highly disciplined and complete officer who never compromised standard during his services at various Commands across the country.
According to him, Gagara, a devoted Christian died in the early hours of Sunday, June 13, 2021 and will be buried in Jos, Pleatue State on Friday June 18, 2021.
The late Commander was survived by wife and children.
According to the PPRO, the Service of Songs will take place today (Wednesday) by 3pm at the Command’s Chapel within the premises of the headquarters in Alagbaka Akure, Ondo State.