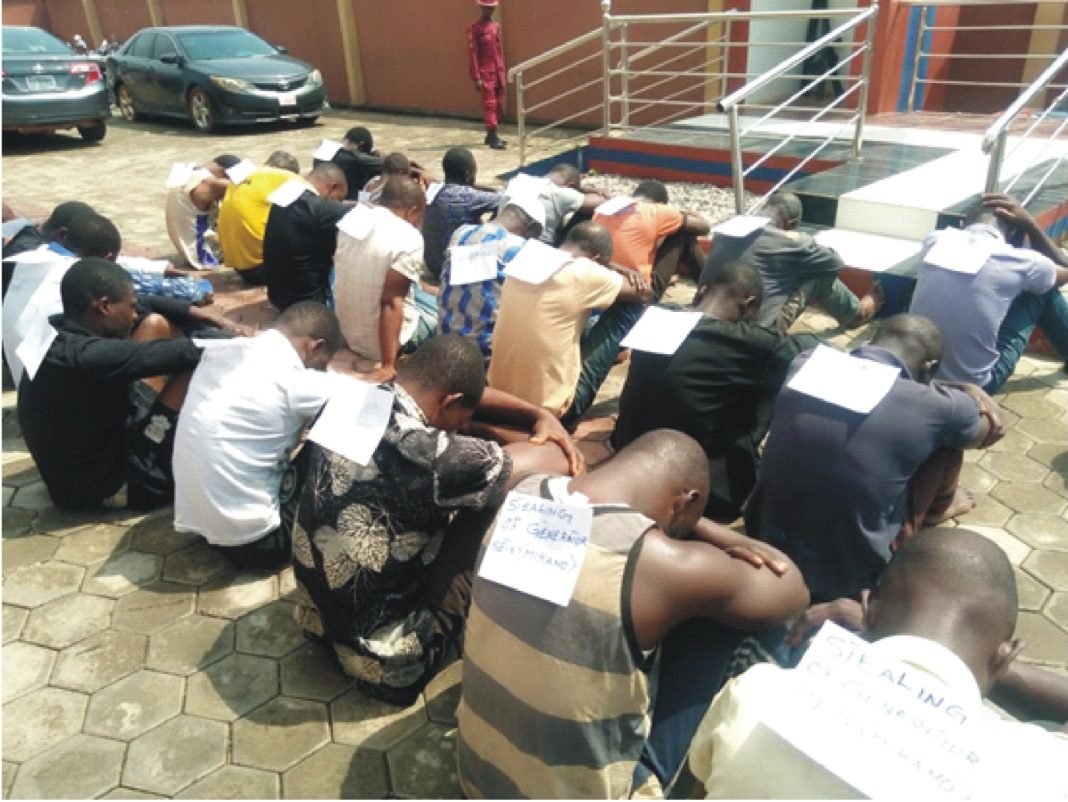 Precious Adewusi, a 16-year-old suspect who allegedly raped his brother’s wife when the brother traveled outside the town has been paraded by men of the Ondo State Security Network Agency, Amotekun.

Precious, reportedly sneaked into the bedroom of his brother after noticing that his brother’s wife was naked while asleep and took advantage of her.

He reportedly threatened to kill the woman if she raise any alarm.

His words: “I came to the house and saw my brother’s wife sleeping sneaked. I went into the room through the window and slept with her.

When I realised my brother was not around I saw it as an opportunity to do what I have been craving for so I grabbed it.

He said “In our farm land at Laosun, I have raped up to nine women, both young and old.

I do it out of pleasure. Some of them were 19 or 25 years old, that I raped in the night. I will sneak into their rooms and start sleeping with them. I do not use gun or knives to threaten them.

Some times, the ladies would identify  me the next morning and report. Then, the people there will beat me up and later release me.”.

I have been arrested before for stealing 25 litres of palm oil. I wanted to gather money to buy phone”, he stated.

Also paraded was a 22-year-old who stole and sold his father’s gun, saying he was trying to get money to travel to Libaria.

Another five-man gang syndicate, also arrested and paraded made a confession on how they stole three Mikano plants. Speaking to The Hope they said, “we have been planning to carry the generators for a very long time. But unfortunately we were nabbed by men of Ondo Amotekun and they brought us here.

A 42- year-old Yusuf Bello from Kaduna state who was alleged of stealing, confessed to The Hope during an interview while parading the suspects said that he is doing menial labour, carrying goods at the market otherwise known as “Kaya”

” Whenever I carry goods for any of my customers, I normally remove one of two items from the load.

“I have been carrying out this act for a very long time. I have been able to open a shop for myself at my village.

The Commander of the Ondo state security Network Agency Corps, Akogun Adeleye during the parade confirmed the arrest of  the 100 suspects in the just kicked off operation Gba le gba ko and warned that time is up for criminals at border towns of Kogi and Edo states.

The Commander stated this while parading the suspects barely few days after flagging-off Operation “Gba’le gba ko” by the Ondo and Osun Amotekun Commanders, in ensuring safety of the South west borders during the yuletide season.

The Amotekun boss said that the border patrol was an initiative of Governor Oluwarotimi Odunayo Akeredolu all to ensure the people can sleep with their two eyes closed.

Adeleye who doubles as the Special Advicer on Security Matters to the Governor explained that ” through operation Gba’le gba ko,  in only one week, we have been able to arrest over a hundred suspects. All of them were profiled out of them were those paraded.

We have been able to break a syndicate that specialised in vandalising communication network power max, transformer and generators. We impounded the vehicles which they hired. We were also able to arrest the perpetuators who will go to court. We have two different sets who we are still profiling. The other members of the syndicate are at large as our men are on their trail.

The bottom line is that during this yuletide season, it is total zero tolerance to criminal activities in Ondo state as we talk we have over 300 men in all major roads leading in and out of Ondo state.

We also have patrol vehicles plying the major roads into Ondo state under the border patrol in other to ensure people can sleep with their two eyes closed. We have in our custody those that are stealing transformer, Illegal possession of fire arms but some of them specialise in burglary.

And to the residents we say see something say something to us. Our distress call number remains 08079999989 we are sure of 24 hours security coverage of the entire state and the express ways leading in and out of Ondo state and for those that are thinking of taking advantage of the border towns of Kogi and Edo. I will say your time is up.

Men of the Army, the police, Civil Defence, the DSS and the Amotekun are on 24 hours patrol of the access road. This tells you the synergy that exists among all security agencies in the state. Hence, we remain resolute that there is zero tolerant to crime in Ondo State.

The Commander who spoke on security during the election period said “we are not only protecting the INEC office, we are protecting the local government area as well. What we are saying is that we will have total security coverage for the entire Ondo state.

“But in the town of Owo and all a joining local governments we are trying to ensure that visitors can come and go without being molested. All major roads into the state are also being covered without creating any security gap in the urban center. This is the essence of operation “Gba le Gba’ko’ you can see part of dividends of the operation, these are parts of the dividends of the exercise which is already yielding results.