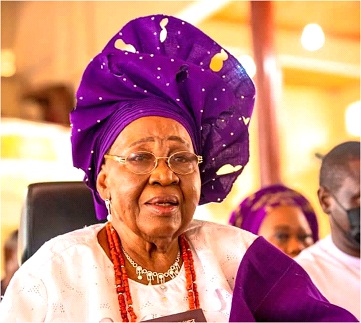 A popular Yoruba adage says, “It is one who is not wanted that his house is far” (Eniti a koba fe nile re njin). But for Governor Oluwarotimi Akeredolu, SAN, CON, the burial of his mother, Lady Evangelist Grace Bosede Akeredolu, clearly showed doubting Thomases and critics that Aketi, as popularly called, is loved by his people and more across all divides. How best can we describe this rather by the presence of the mighty and the low in the society present at his mother’s burial ceremony.

From the President of the country, Muhammadu Buhari, the Vice President, Yemi Osinbajo, who represented his boss (Buhari), the APC Presidential candidate in the 2023 general elections, Asiwaju Bola Ahmed Tinubu, State Governors from across the country, members of State and National Assemblies and other high profiled guests, it is no doubt that Odunayo Oluwarotimi Akeredolu Aketi is a man after many loving souls.

However, if Akeredolu is surely a man of the people, then the deceased, Lady Evangelist Grace Bosede Akeredolu, was a mother like no other. Call her “abiyamo tooto”, you are right, if you say she was a mother in a million, then that is not far from the truth. For those who call her the amazing Amazon, the qualification sticks like a needle in the mud, for others you may say she was a focused mother, disciplinarian, loving and caring soul, you are all hitting the bull’s eyes.

To many, however, mama Grace lived a worthy and exemplary life, both in the upkeep of her children and those around her. She was an enigma, a caring soul personified or how else do we describe her especially as she had to be responsible for the training and bringing up her offspring and that of others despite the fact that her husband died when she was 50 and kept the mantle going until she finally bowed out at 90, that means, being in charge of the family front for 40 years.

Lady Grace Bosede, who was buried beside her late husband, no doubt, was God’s own special one.

The funeral ceremony of the deceased was no doubt a celebration of life. It was one that deserved its pomp as all the “who is who” in the country temporarily relocated to Owo at the weekend to celebrate with the people acclaimed “Mr Talk and Do”, Arakurin Odunayo Akeredolu,

The Vice President, Professor Yemi Osinbajo, who also represented the president, the presidential candidate of the All Progressives Congress (APC) in the 2023 general elections, Asiwaju Bola Ahmed Tinubu, were among many prominent Nigerians who graced the church funeral service.

In his sermon, the Bishop of the Owo Anglican Diocese, The Rt Reverend Stephen Fagbemi told the APC Presidential candidate, Asiwaju Bola Tinubu, that God has put him in a position where he can make make a difference in the country.

“Go to hospitals and schools and see what Nigeria is like. I encourage you to go to FMC here in Owo to campaign and see what the future holds.

“The poor are getting poorer. Nigeria needs a change that will ensure safety and security in villages. We need a government that understands economics. Life is hard in this country. Let our leaders be careful to help us move things forward. The best place to start campaign is hospital.”

Revd Fagbemi urged Governor Akeredolu and his siblings to immortalise their mother because she lived a life of service to God and humanity.

Akeredolu, in his response, posited that there are politicians in the Southwest the people could be proud of.

“We have listened to your political sermon. It was wonderful listening to the sermon. I will not contend with you but I know as politicians we are doing our best. It might not be good for everybody.

“You should also say the things we have done. Continue to pray for us so that we will do our best. We will look at it. It is not that we are not trying. We have our shortcomings. We have crops of politicians in the Southwest we can be very proud of. Not all of us shall die. We shall be here when Christ shall come.”

President Mohammadu Buhari who was represented by Vice President Yemi Osinbajo, said the life of the mother of the Ondo Governor deserves celebration.

“Today is a day of great joy. We have reached where we must celebrate one of the greatest legacies. It is a time to celebrate mama because of the great deeds.

“The life of Grace Akeredolu is a life worthy of celebration. She lost her husband at the age of 50 and lived up to 90. She brought up her children. She made a great effort at raising four boys.

“She did very well indeed. We must thank God because not only did she bring up her children well, but all of them are successful. What we must celebrate most her service to God and mankind. We celebrate the life of a great woman, a woman who served God well and her community.”

He congratulated Governor Akeredolu and his siblings on behalf of the Federal Government of Nigeria and President Muhammadu Buhari for surviving their aged mother.

The Vice President advised the children to sustain the good legacy of their late mother.

In his tribute, Tinubu want Nigerians not to give up on politicians. He said the APC would do better.

“Thank God we are alive, there might be weaknesses and inadequacies in expectation, no one wants failure. You cannot give up on us. We will do better. We will contribute to the improvement you might want. Mama has given us the grace of the day that she will not be the one to bury us.”

Meanwhile, the funeral ceremony had earlier been preceded by the traditional Ajabue dance, a procession along the streets by children, families, friends and relatives of aged dead ones in Owo, on Wednesday, November 8, as Governor Akeredolu led his siblings and other guests during the dance.

The traditional procession was a spectacular event to behold as the people of Owo, who could not hide their love for their son, trooped out in their large numbers, decked in the aso ebi that was meant for the occasion, joined the children of the deceased to dance round during the Ajabue traditional procession which started from the Jacob and Grace family residence in Oke-Ogun, Owo part of the town.

The State Chairman of the All Progressives Congress (APC) Engr Ade Adetimehin; Chief of Staff, Chief Olugbenga Ale; Special Adviser to the Governor on Union Matters and Special Duties, Mr Dare Aragbaiye; Commissioner for Infrastructure, Lands and Housing, Engineer Raimi Aminu; Commissioner for Commerce, Industry and Cooperatives, Deaconess Lola Fagbemi; Special Adviser to the Governor on Transport, Tobi Ogunleye and Chairman of the Ondo State Internal Revenue Services, Mr Tolu Adegbie, were all with the governor throughout the procession.

Speaking after the traditional procession, Prof. Wole Akeredolu appreciated the people of the town on behalf of the Governor and other siblings.

According to him, the large crowd that participated in the Ajabue dance has clearly shown the love the people have for their late mother and the family in general.

Guests were later hosted to a grand reception at the Mydas Resort and Hotels, Ikare Road, Owo.