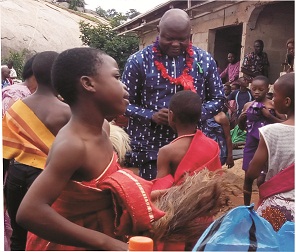 Glory Land Pry School to get block of classrooms

Education Secretary, Akure North Local Government, Mr Dayo Olowere declared this while addressing the parents and pupils of the school during their end of the session celebration last week.

He enjoined the pupils particularly the graduating students  to be good ambassadors of their families and the school when they get to  their secondary schools and beyond.

Chairman of Glory Land Community, Pastor Sunday Adeyemi thanked the government for its concern for the upliftment  of the school, saying Akeredolu led administration is the first to have an input in  the school’s development  since it was established  in 2005.

We thank the government for her concern  for this school. The government last term posted seven qualified  teachers to the school like a magic because we couldn’t believe when the education secretary made the promise until it was fulfilled .

“This is the first administration that we have ever felt its  impacts since the school was established in 2005. We are grateful for the teachers posted to the school and showing our appreciation in advance for the proposed new classrooms for the school

Speaking on behalf of the graduating students, Senior Prefect boy ,Timilehin Adeyemi thanked their teachers for the training and knowledge impacted on them and  promised that they will be good ambassadors of the school.