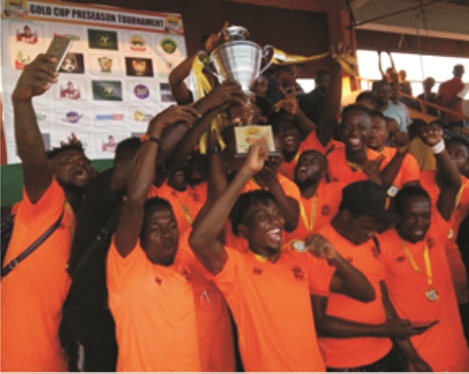 By Femi Atolagbe
|
Sunshine Stars were crowned champions of the 6th edition of Gold Cup Preseason Tourney after they beat Kwara United by a lone goal on Sunday at the Ondo State Sports Complex, Akure.

It was a second Gold Cup trophy in the cabinet of the Owena Waves in six years.

Both teams failed to create any clear cut chance, as they played with caution with a view of holding on to ball possession.

The second half recorded a bit of action as Kwara attacking midfielder Sunday Emmanuel who should have scored the opening goal, but the former Sunshine Stars player decided to shoot the ball straight to goalkeeper Emmanuel Ariyo.

In the 54th minute, Thomas Adesina should have scored but wasted the chance as he shot his effort wide.

However the duo of Anthony Omaka (Sunshine Stars) and Segun Alebiosu (Kwara United) were rewarded for their brilliance performance in the tourney.

Omaka went home with the Vomoz Mobile Most Valuable Player of the tournament award while Alebiosu got the top scorer’s award respectively.