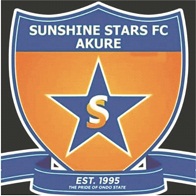 By Femi Atolagbe
|
Sunshine Stars FC ease past Alabelewe FC 2-0 to record their first three maximum points, after a disappointing 1-1 draw with Cynosure FC in their first match of the pre – season tourney tagged Ogunjobi Gold Cup in Ilorin .

Kolade Adeniji gave the Owena Whales the lead  4th minute into the second half as he tapped in from close Omaka rebound  effort, after a barren first half draw of the preseason tourney held at Ilorin Township Stadium.

Alabelewe orchestrated effort to get a leveller after beautiful tee up that resulted in the first goal  were well tamed by the Sunshine back four.

Introduction of the duo of Tosin Olabode and Dayo Ojo in 69th and 73rd minute of the game yielded the desire result as Afolabi Abdulwaheed heads home from Ebuka cross to make it two for the Sunshine Stars in 74th minute.

To end the match 2-0 and gave the Ondo state senior  team the first victory of the competition they won last season  as a host state.

The pre-season tourney were organised to put the Nigeria Professional Football League (NPFL) teams in shape ahead season .

But the sports enthusiasts in the state are hoping to see their darling team defending the trophy by wining it back to back to mark the beginning of the new season.