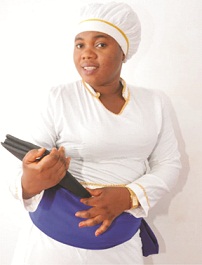 She described as very disheartening and unfortunate  rate at which many Nigerians, especially youths who would have become leaders of tomorrow are committing suicide as a result of pressing challenges and difficulties.

Speaking with Friday Extravaganza in Akure, the dark- complexion musician enjoined Nigerians to always strive to be closer to their creator by listening to gospel music that will restore their hopes when it seems that all is lost, rather than embracing secular songs that are mostly devoid of heavenly virtues.

“This is one of the numerous problems gospel songs will solve. It calms tension and relaxes ones nerves when you listens to it. Gospel music reassures, it ministers to one’s soul and melts the heart especially when passing through difficult moments.

“It preaches salvation and redirects one’s heart to the promises of God Almighty which is filled with hope when passing through turbulent situations.

“Taking one’s life can never be a lasting solution towards getting out of myriads of challenges, but listening to God’s words through gospel songs would save many from committing suicide because of the life-transforming messages embedded in them.

She further added that gospel songs, apart from its entertainment nature, simplifies virtually all problems and proffers ways of solving them, instead of people taking their own lives and ending up in hell.

According to ‘Omo Alase’, there is a clear distinction between a gospel artist and  an entertainer. Gospel songs connect you directly with God and the everlasting treasures that abound in worshipping Him, while secular music may be entertaining, but with very ephemeral pleasures.

On her new album titled “Ogo Cele”, meaning (The glory of Celestial), which she said preaches love, deliverance through testifies, spiritual revival and repentance, explained that she followed God’s instructions after she had been inspired, which birthed the album.

“As a member of the Cherubim and Seraphim Church, it baffles people seeing me come out with ‘Ogo Cele’, Despite not belonging to a Celestial family, but I tell them that it’s all targeted at glorifying God.

“I was invited into a group called ‘Ogo Cele’ where I started ministering alongside other members. While I was in the group, I heard the voice of the Lord which instructed me to come up with a song titled ‘Ogo Cele’.

“This revelation got me dazed and confused but I have no option than to obey God’s words. Immediately the inspiration came, I started putting something into action and it was a huge success to the glory of God”, she said.

Describing music as life itself which transforms people’s lives, the Akure-based Ogbomosho born Actress said combining both music and acting is a bit tasking, but becomes possible through the grace of God.