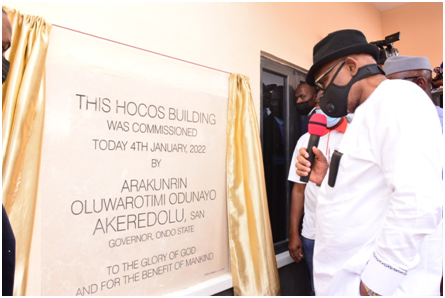 Performing the ceremony at the Ministry of Infrastructure, Lands and Housing, Akure, the governor said the HOCOS Scheme was not geared towards raising funds but to provide easy access of property titling in the state which would be done between 30 to 60 days.
Akeredolu explained that record has shown that there were many landed properties in the state that do not have registration document titles, saying it exposes the property owners to risks such as defective transfer of properties and encroachment among others.

“If your property is not titled, at your demise, it might lead to dispute. If your properties are not titled you have not taken advantage of commercial value of those properties.
The issue is, you can have access to finances because you have a title document, many of us don’t know this”, the Governor added.

He noted that the customer-friendly scheme was for the benefit of all property owners across the state, and advised them to key into it without any further delay.
He said the HOCOS programme would be the fastest, cheapest and less cumbersome in taking land titles.

Akeredolu disclosed that the scheme would be another landmark achievement by his administration in the state.
Earlier, the Commissioner for Infrastructure, Lands and Housing, Engineer Raimi Aminu, said the HOCOS scheme was a novel initiative of the State Government aimed at ensuring that every property owner in the state has proper and genuine title documents.

He added that the scheme was also created to allow home owners take proper documentation and regularization of their properties’ legal status which would provide adequate data for government to facilitate provision of basic amenities and planning of essential services needed in the development of the state.

According to him, the scheme would bring a lot of respite to the people of the state and improve the ease of doing business.