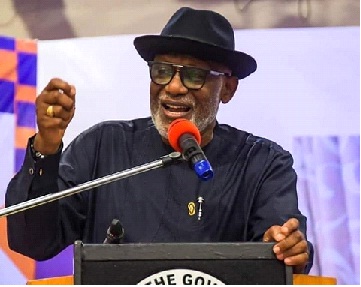 The Governor of Ondo State, Oluwarotimi Akeredolu, on Tuesday performed official flag off of the Orange Health Insurance Scheme (ORANGHIS) for public servants in the state.

At the well attended event held at the International Culture and Event Centre, The Dome, Akure, Governor Akeredolu explained that the official flag off of ORANGHIS ushered in a breath of fresh air in the healthcare delivery system in line with the fifth point of his government’s REDEEMED agenda, which is Effective Healthcare and Social Welfare.

According to him, ORANGHIS is designed for all political office holders and civil servants in the State, stressing that the delight of any Governor in a developing country like Nigeria, is to be able to create a sustainable funding mechanism that lowers the financial barriers to healthcare for the citizenry.

The Governor revealed that in spite of the obvious economic constraints across Nigeria, his administration has approved the joint contribution of 3% of gross salary of each public servant under a sharing ratio of 1.8% by the State Government and 1.2% by individual public servant, as the premium for a family health insurance plan, covering each public servant, one spouse and four biological children below the age of 18 years.

He particularly acknowledged the patriotic support of the labour unions in enthroning the Orange Health Insurance Scheme, saying they have shown maturity, dedication, understanding and true sense of comradeship.

Akeredolu also noted that it is on record that the state is the only State Government, in recent times, that is taking up the responsibility of a larger percentage (60%) of the health insurance premium for public servants, saying government is doing so as part of the social welfare promise under the REDEEMED agenda.

“I am aware that enrolment of public servants under ORANGHIS has commenced at a time that many of them truly need healthcare services which they cannot afford. It is a known fact that we are daily inundated with financial requests for health care. So, your little contributions under ORANGHIS have combined to form a pool of funds from which anyone of you who requires any of the health care services covered by the scheme would not have to pay a dime. Our government-owned and privately-owned hospitals that have been accredited under ORANGHIS would also soon wear new looks.

“Finally, please be assured that the State Government’s percentage contribution and the premium deductions from public servants’ salaries to the Orange Health Insurance Scheme shall not wane. Furthermore, a fourth health insurance scheme known as Sunshine Health Insurance Scheme (SUNSHIS) for the informal sector that makes up about 95% of our population shall also commence in the nearest future to cover artisans, market women, commercial transport operators etc. I am also aware that pensioners and students shall have their own scheme too. This means that every resident of Ondo State will be brought into the safety net of the Universal Health Coverage”, the Governor said.

In his welcome address, Commissioner for Health, Dr. Banji Ajaka commended the Governor for his improvement in the health sector including the creation of the  State Contributory Health Commission, development of the University of Medical Science Teaching Hospital, purchase of multi million naira worth of medical equipment for Primary Health Care facilities in batches, establishment of the state Drug and Health Commodities Management Agency among others.

Head of Service, Pastor Kayode Ogundele in his opening remarks stated that the Governor has again demonstrated his commitment to workers’ welfare through the launch of ORANGHIS which according to him will improve their productivity

Special Adviser to the Governor on Health, Prof Dayo Faduyile explained that the Sustainable Development Goal(SDG) 3.8 which is about Universal Health Coverage (UHC) will be achieved in the state as the Governor has put in place measures including the Abiyamo scheme for pregnant women and under five children, Basic Health Care Provision Fund and the ORANGHIS for public servants.

He assured that government will ensure that the informal sector benefit for the health insurance in few months.

Director-General ODCHC, Dr. Abiodun Oyenehin while speaking noted that ORANGHIS covers treatment of common illnesses, surgeries, dental and optical care, antenatal care, delivery including Caesarean Section, management of common diseases in children among others at no cost adding that the benefit package and the scheme’s guidelines will be made available to all.

Representative of the Director-General, National Health Insurance Authority (NHIA), Mr. Femi Akingbade commended the giant strides of the Governor in the health sector which according to him aimed at improving the welfare of residents.

In his goodwill message, DG, Development Agenda from r Western Nigeria (DAWN), Seye Oyeleye while describing health insurance as a critical tool which is important for the achievement of several development outcome, stated that healthy workers are more motivated and productive.