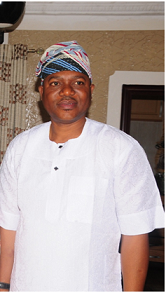 The Ondo State Executive Council has formally approved and ratified the appointment of the Olowo-elect, Prince Gbadegesin Ogunoye, as the new Olowo-elect of Owo Kingdom.

The development was part of the far-reaching decisions taken yesterday by the EXCO members led by the state governor, Arakunrin Oluwarotimi Akeredolu.

Briefing Government House correspondents shortly after routine EXCO meeting held at the EXCO Chamber, Governor office, Akure, the state Commissioner for Information and Orientation, Donald Ojogo, particularly appreciated the support of the senior Omo-Olowos and the entire people of Owo Kingdom for the peaceful selection processes which culminated in the appointment of the new Olowo-elect.

It would be recalled that the stool of Olowo, a grade ‘A’ stool became vacant following the demise of Oba Dr. Folagbade Olateru-Olagbegi who joined his ancestors on May 19, 2019.

Ojogo stated that the development was part of other major decisions taken by the members of the State Executive Council which would enhance the well-being of the people of the state.

He revealed that the selection process followed due process without any legal encumbrance.

The commissioner further said the EXCO equally approved the upgrade of Chief Beniah Adeola Idiogbe as the Alaboto of Aboto in Ilaje Local Government Area of the state.

He, however, explained that the upgrading process was not a new exercise as the state government had approved it since 2007.