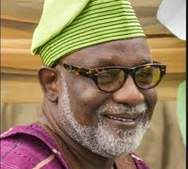 By Chris Chimezie
|
Ondo State Governor, Arakunrin Oluwarotimi Akeredolu  has again reiterated his administration’s commitment to address the huge infrastructural deficit in the State by opening up both rural and urban areas for desired development.

The Governor made the pledge while inspecting the ongoing 5.25km township road projects in Ile-Oluji and another 8.5km Fagbo road projects at Bolorunduro in Ondo East local government.

He applauded contractors handling various road projects in the state for quality jobs and assured the people of his administration’s readiness to complete all the road projects embarked upon by his government.

Akeredolu, while noting that his administration is poised to develop the state through industrialization, infrastructural upgrade and agriculture, sought the cooperation of everyone for his aspirations to be achievable.

Earlier, Commissioner for Finance, Wale Akinterinwa, commended the governor for fixing the roads which past governments had neglected.

He described the quality of job being witnessed as such that had never been experienced in the history of the community.

“We do not take it lightly, we appreciate what you have done for us. This is something that has cut across both the elites and the grassroots people.

“Everybody celebrates Akeredolu in this community and it is a well-known fact that despite the paucity of funds, what you have done is far more than what most governments which had spent longer periods had done.

“This, to me, is uncommon grace, because you are thriving even when there is little. It shows that there is the hand of God upon your life and we pray that such grace will continue to abound for the people of the state to continue witnessing more infrastructural developments “, he said.

Also, Director-General, Technical Aids Corps (TAC), Dr Pius Osunyikanmi, an indigene of the town, commended Governor Akeredolu for his laudable projects in Ile-Oluji and the state in general as well as the contractor for delivering a quality job.

“I have been involved in the politics of this state for almost 24 years and what we are witnessing today has never happened in the anals of the history of Ile-Oluji.

“Most importantly, Lota road has always been the campaign point for every Governorship aspirant, and each time they are elected, they would abandon it.

“But you came, promised and have delivered. On behalf of the people of Ile-Oluji community, I thank you for your visionary leadership and we will continue to pray for you.

“If you drive through Temidire street and round the town, you will see our children pulling down old buildings and replacing them with new houses compared to those that can be found in Maryland and London.

“These are made possible because of the leadership and infrastructure you have provided and the assurance of sustainability”, he said.