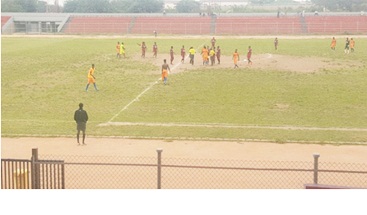 From Fisayo Akinduro, Osogbo
|
The Osun State government has promised to renovate  facilities at the Osogbo Township Stadium to make it more suitable for all sporting activities.

Commissioner for Youth and Sports, Hon Yemi Lawal gave the assurance while speaking with newsmen during an inspection tour of the structure and facilities at the Osogbo township stadium.

Lawal, who was warmly various with encomiums by several spectators at the stadium inspected the football pitch, tennis, basket and volleyball courts, players changing room, weight & para-powerlifting base, Osun United and Osun Babes hostels among others said the state government would do the needful to turn the fortune of the stadium around.

While expressing satisfaction with the land mass of the ‘game village’ said there was the need to construct a training pitch to avoid overuse of the main pitch.

“I have gone round to see these facilities and I’m happy that there are few finishing touches required in some areas.

“However, we will try our best to complete the remaining ones and ensure that a training pitch is constructed to limit the usage of the main pitch which should be reserved for major matches.”

When asked about the return of Osun United to the Nigerian National League (NNL), the Commissioner said “the management and I have discussed about it and I can assure you that Osun United will play in the NNL next season. Their demands from the government will be met in no distant time”.

He lauded the management boards of Osun United and Osun Babes for putting in place, befitting accommodation for their players and promised to table comprehensive report of the on-the-spot-assessment to the sports loving Governor Gboyega Oyetola, who according to him would not renege in fulfilling all his electoral promises.