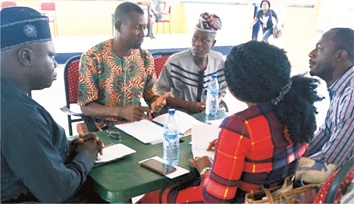 By Femi Atolagbe
|
The annual football competition for teams within Idanre Local Government Area has kicked-off to mark the 10th edition as rivalry will be rekindled for the next ten days in the ancient Odode-Idanre.

The 2018 edition which kicked-off at the sports field of the Government Technical College Idanre was graced by dignitaries from all walks of life including the Chairman of Idanre Local Government Area Hon. Biyi Ayannuola.

In the opening match which turned out to an explosive encounter VATA FC of Idanre who finished the match with ten men after they had their captain sent off for dangerous play held on to a dramatic 2-2 draw against IDF FC in a match where chances went begging in either half even as both goalkeepers were busy between the sticks.

Speaking shortly after the encounter the Chairman of Idanre Football Association Charles Ogunyamodi lauded the teams for their level of display while he also commended the  Chairman of the All Progressive Congress(APC) in Ondo State, Engr.Ade Adetimehin for deeming it fit to sponsor the competition this year after previously failing to attract any sponsors in the last two years.

Ogunyamodi who also praised members of the Idanre Football Association at ensuring a well organized competition hinted that matches will go full blast in the New Year.