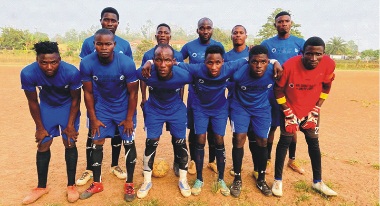 The quarterfinal match between both sides decided at the Ijapo/ Housing field had earlier abandoned after some players and fans of Acomoran FC invaded the pitch in protest for a penalty after they were trailing their opponent 1-2 three minutes to end the match.

After minutes of disruption the center referee signaled the continuation of the tension soaked encounter, which Acomoran later found the back of the net to level the deficit which infuriated the spectators at the playing ground and caused the game to be abandoned.
With the intervention of football stakeholders in the state both sides agreed to play additional straight fifteen minutes to finish the abandoned match yesterday.

Five minutes into the end of the game, Olorunda John sealed the victory for his side after benefited from Tobe’s free kick rebound to tap home for his side.

The coach if Ijapo Ages FC Olaleke Michael Karimu commended his players for their resilience saying God is always on the side of truth.

He lauded all the stakeholders involved in the peace move that led to the continuation and conclusion of the match.

He said,we are not going to be carried away with this success, we are going back to the drawing board to focus on our next match.