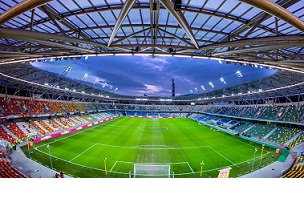 By Femi Atolagbe
|
Nothing less than twelve teams are ready to go head to head during the 2019 edition of Genesis Global Football Competition (GGFC) slated for November 30, 2019 in Ondo city.

The competition  is organized by the Ekimogun All Sports Foundation (TEAS) and sponsored by Mr. Mukaila Adekuoroye

“The competition would be an annual event among male elite football clubs within Ondo state to develop young football talents.

“TEAS is an association of football enthusiasm  poised at developing sports at the grassroots; our aim is to discover talents, equip them, develop them and promote them to become professional in any field they choose in sport. We also promote sports among adults.

“It is our future goal to continue in uniting the communities in all the 18 local government areas of the state and Nigeria at large”.

Sponsor of the competition, Mr. Mukaila Adekuoroye said his passion for the game of football encourages him to develop talented young footballers in Ondo city and its environs.

He said sports is an avenue to unite people and communities, urged the registered teams to obey the rules of the competition.

“Our youths are embodied with talents but need competitions to develop them. Genesis Global football competition will engage the youths and eradicate violence in our society”.

The teams were however divided into three groups with two winners to emerge from each group and two best losers to join for the knock out stage.