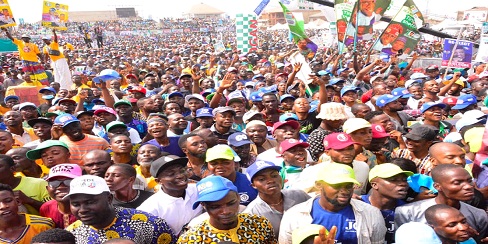 Ahead of this year general elections, a political group, South-West Agenda for Asiwaju (SWAGA) has expressed confidence that the All Progressives Congress (APC) and all its candidates will emerge victorious in the forthcoming elections.

The Deputy Chairman of the group in Ondo State,  Mr Albert Akintoye, disclosed this while donating secretariat building for Tinubu’s campaign in Ore, the headquarters of Odigbo Local Government.

He reiterated the commitment of the group to work assiduously for the presidential candidate of the APC, Asiwaju Bola Tinubu in the February 25 election.

“ I am very satisfied with the way the campaign is progressing. Everywhere, Asiwaju is accepted by the generality of the people.

“The campaign is gaining ground everyday here in the southwest. We at SWAGA started this and we have promised that we are going to deliver 14 million votes to Asiwaju and that promise still stands and we will even surpass the number,“ stated.

Earlier, the National Chairman of the group, Prince Dayo Adeyeye, while speaking at the event admonished supporters of the party to support Tinubu in the forthcoming presidential election

“Our own Asiwaju Bola Ahmed Tinubu is out-working other presidential candidates in political campaigns.

“Political campaigns of the All Progressives Congress ( APC) show that the party’s presidential candidate, Asiwaju Bola Tinubu, is accepted by the  generality of the people of Nigeria.

Also, the state Chairman of SWAGA, Mr. Ifedayo Abegunde sought for more mobilization for the party’s candidates to win convincingly in the forthcoming elections, saying that this can only be achieved by voting enmasse.