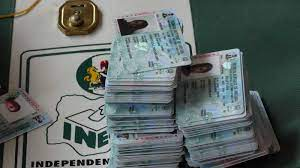 Less than six weeks to the 2023 general elections, a Civil Society Organization (CSO) Journalists For Open Government (JOGO) has decried the huge numbers of uncollected Permanent Voters Cards (PVCs) across states in Nigeria.

The founder and Executive Director, JOGO, Mr. Yaqoub Popoola ,in a release made available to journalists on Sunday in Ado-Ekiti, said the huge figure of unclaimed PVC  was an indictment on the youths who are craving for more space in politics and government.

Recall that the Independent National Electoral Commission (INEC) hinted that about 7million uncollected PVCs are still in its custody.

The electoral umpire has extended the timeframe for its collection by eight days.

According to the organisation, “In the words of late Martin Luther King Jr.” Democracy transformed from thin paper to thick action is the greatest form of government on earth.” JOGO therefore tasked the Nigerian youths to use the power of the social media to increase sensitisation.

” It is very sad that Nigerian youths often discuss politicians issues  more than their civic responsibility. If the youths deployed same energy as one they use in marketing their preferred candidates, Nigeria would have been a better place for all by now. It is high time issues concerning governance and election  dominated discussions among the youths.

“It will not be out place for the various youths organisations to organise workshops and rallies on the subject matter .

“This year offers another golden opportunity for the youths to change the narrative of the long years of political marginalisation and leadership neglect. This can only be made possible through the ballot.I want to appeal to the youths to ensure that the discussions on social media centre around  2023 poll and the need to take informed decision.

” Let it be known that whoever fails to participate  or exercise his or her franchise in the coming election lacks both moral and legal right to criticize the government for any wrong doing.This election deserves our attention and commitment more than ever before .If Democracy is about the voice of the majority, then the youths must say “the statement reads in part .

Excesses of the Police

Excesses of the Police