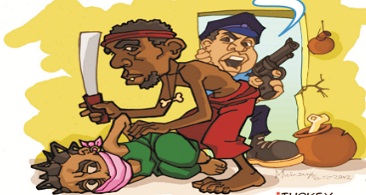 By Jubril Bada
|
Vying for political offices is a high state activity and the desperation of some Nigerians sometimes drives them to do unsavoury things like being reportedly involved in ritual killings.

A trader, Mr. Fredrick Joseph said that ritual killing is a common phenomenon that is rampant among Nigerians during electioneering period in Nigeria, in a bid to win elections.
The Akure cloth seller, Joseph explained that Nigerian politicians believe fervently in performing rituals to bring political fortunes to themselves.
He said some Nigerians are willing to do whatever it takes to win juicy political offices.
“The herbalists said the desperation of politicians and asking them to bring chicken or goat will scarcely make such people believe that the herbalist is powerful enough to make them victorious.
“With the demand by the herbalist, over ambition forces them to search for different specifications of people required by the herbalists, like the hunchback and albino for the ritual among others,” he noted.
He warned people to be wary of desperate politicians, who are ready to sacrifice whatever it takes to come out on top in their political struggles moving on to the 2019 general elections.
The founder of Christ Apostolic Church, Glory land, Akure, Evangelist Laka Taiwo, recalled he had predicted in one of his church programmes early this year that 2019 would not be the problem but in 2018 when there would be increase in rituals by politicians in preparation for 2019 general elections.
He said he predicted that many people would get lost or murdered because of the over ambition of some desperate politicians to gain and occupy political positions in the forthcoming general elections.
The cleric said” some politicians may choose to sacrifice human beings to realise their ambitions.”
“Many have sold their souls to the devil in order to win elections and link up with through some clerics and herbalists specialising in ritual activities,” he said.
He maintained that there were many ritualists dens reported by the popular radio presenter “Omo Edema” allegedly used by ritualists for killing and selling of human beings in Ondo State and patronised by desperate politicians.
He suggested the need for people to be careful through prayer.
“In the taxis and other public transports or while trekking along the road, one needs to be very careful and watch who is coming behind or going in front of him.”
The cleric expressed disappointment in those in positions of authority for not taking drastic step to curb the menace of ritual killings.
Also, the Zonal Missioner, Nasrul-Li- Fatih Society of Nigeria (NASFAT), Ondo and Ekiti States, Alhaji Ibrahim Sodehinde, said people’s focus should not be on this world alone but think of judgement in the hereafter.
Quoting from the holy Qur’an, he said believers should fear Allah and remember His judgement.
He warned muslims not to engage in things not defendable on the day of judgement.
“Either you take it or leave it, if you have not been destined to become what you aspired to become, even becoming a councillor will elude you.” he advised
He noted that good muslims should not engage in things what are against Islam because only Allah gives people positions.
Sodehinde suggested solution to the eradication of the dastardly act of ritual killings by taking cue from the developed societies where the people vote based on party ideology and for politicians with integrity.
He warned the electorate to desist from selling their votes to politicians as this development will continue to go a long way to impoverish them.
Ritual killings by politicians when an election is fast approaching seems to be on increase in Nigeria.
.