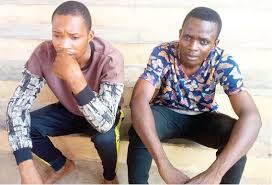 The accused persons were brought before the court on a two count-charge of conspiracy and stealing.

The prosecution said, the accused persons, at about 8:30pm  on January 13, 2019, committed felony to steal a woman’s pant at St. Thomas Anglican church, off Arakale Road,  Akure.

The offence committed was said to be contrary to and punishable under section 516 and 390(9) of the criminal code cap. 37vol 1laws of Ondo state of Nigeria 2006.

The accused persons pleaded not guilty to the charge when it was read to them.

The prosecutor, Inspector Adeoye Adesegun, told the court that four out of the six prosecution witnesses were in court.

Lawyer for the accused persons, Mr Joseph Orinju, did not oppose the adjournment made by the prosecutor. But he prayed the court to grant his clients bail in the most liberal term.

In his ruling, the magistrate, Mr Olanipekun Mayomi, granted bail to the defendants in the sum of  N200, 000 and two sureties in like sum.