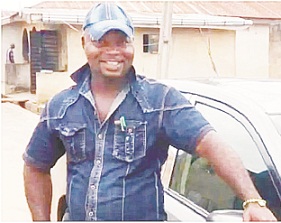 By Tola Gbadamosi
|
A ward Chairman of the ruling All Progressives Congress (APC), in Akungba-Akoko.  James Tolorunju Ajulo, has been abducted by unknown gunmen.

The Hope Metro reliably gathered that Ajulo was on Sunday, kidnapped at his residence in Ibaka quarters of Akungba-Akoko .

According to sources, Ajulo’s personal residence was stormed by his abductors, shortly after his arrival from an outing, while they ransacked his house before they took him away to an unknown destination.

Ajulo, who was one of the factional ward chairmen of the APC in Akoko South West Local Government Area of the state, was reportedly driven away in his personal car by the gunmen.

A political associate of the victim, Mr. Tolu Babaleye, who narrated the incident, said, “The kidnappers laid an ambush for him in his house.

“They ransacked his house after which they took him away in his car. They used the Toyota Sienna car they came with as a backup to escape from the scene.

“They shot sporadically in the air to scare away residents which aided their escape from the town.

While stating that the kidnappers were yet to establish contact with the family, Babaleye, a lawyer and APC chieftain, stated that the matter has been reported at the Akungba Police Division.

He also called on the Department of State Service, DSS, Army, Police and Civil Defence Corps to assist to rescue him unhurt.

Confirming the incident, the Police Public Relations Officer in the state, CSP Femi Joseph, disclosed that investigation had begun into the development, as police detectives had been mobilized towards rescuing the victim.