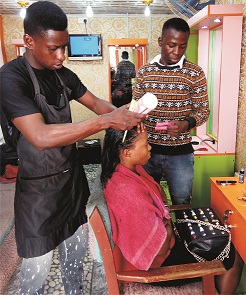 By Agboola Fesobi
|
Mr Olaiya Shinaayomi, a native of Ewekoro Local Government in Ogun State, is an hairdresser with ten years experience.

He said that the job is not restricted to the women folks, adding that “I have passion for the job and that was what prompted me to venture into it.

“I discovered that male folks are accepted and it is not as if the women who are in the business are better. In fact, the trend today is that many women prefer to patronise male hairdressers rather than the female.

“So far, I have trained over 70  apprentices, both male and female. I started in Ibadan, where I was an apprentice for two years, before relocating to Akure and I have spent about seven years here.

“With the proceeds from the job, I take care of my immediate family. In fact, if there is enough sales no civil servant can boast of what I make daily.

“The major challenge I had was that when I started I was not too perfect as the job is very broad. Customers complained because sometimes what they demanded from me they didn’t get and it really gives me concern.

Majority of my customers are females, but it does not affect my home in anyway.

“In fact, there are times, because of the trust my wife has in me, she picks my call and tells the customer of my whereabout. She even brings the phone for me to pick at night when I am asleep.

A senior colleague introduced me to her because she does not know the job as I do, she called on me and I gave my optimum service. I did the job so well that the wife of the former Governor started dealing with me directly.

“Since then, I made a vow to God that I will not collect a dime from whoever  comes to learn from me.

“Presently I have 12 apprentices. Some are even in the university and are learning it on a part time basis. After their normal academic calendar they come here.

“And from the profit I make I have successfully sponsored my own schooling. I have Ordinary National Diploma (OND) from The Polytechnic Ile- Ife where I read Mass Communication. Any moment from now, I will go back to school for my HND.

“There is money to be made in the business particularly for those who are prudent. Averagely on a daily basis, I make around N5,000 and during the festive seasons I make around N25,000 a day.

“Patronage is high because the average woman cherishes her hair since it is what attracts her to her husband, and more importantly, it is a fashion statement for the public to admire about her.

“Women patronise male hairdressers  because they can express themselves freely with them, unlike what is obtainable among their fellow women, where jealousy can come to play.

“And men who are involved in the hairdressing saloon business tend to be more serious because their families depend on them.”

He added that through the business, he had met many people that he would not have met.

According to him, to start the hairdressing business, technical know-how is needed, therefore, being patient to learn is an important trait a potential learner should have.

He appealed to the government at all levels to establish skill acquisition centers where young and able bodied men and women, who are ready to work can learn and be productive, not necessarily waiting for the non available white collar jobs.