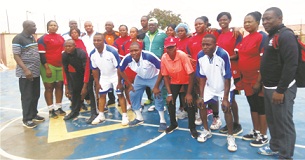 By Femi Atolagbe
|
In commemoration of one  year demise of the late handball Coach Gloria Udofia, handball veterans, friends from Ekiti and Ondo States during the weekend came together to organise a memorial competition for  U -12 and U-15 in her honour.

The competition that was organised at the State Sports Complex, Akure brought together handball veterans from length and breadth of the country to Ondo State.

The National President of Handball Federation of Nigeria, Mr. Samuel Ocheo, who donated sets of Jerseys and Handball balls for both Ondo and Ekiti states, said late Udofia played integral part in bringing up a lot of handball players from the two states and Nigeria in general to lime light.

Ocheo expressed happiness at the level at which  the kids are playing the game advised the organisers to make it an annual event to always enable them remember the hard working late coach, who while alive impacted so much in their life .

He urged both states to keep it up to continue organise more event like this saying if this kind event should continue it will enhance talent discovery in Ekiti and Ondo State .

The President of Common Wealth Handball Association, added that they are working hard to ensure handball did not go to extinction, saying all hands must be on deck to make handball second after football most recognised sports in the country.

Earlier, the chairman, planning committee of the programme, Mr. Olawale Felix Fadeni eulogised the late coach and thanked the National President of Handball Federation for not only identifying with the people of the states but for the gift he presented to encourage the game in the two sister’s state.

He explained that the event were put together by the handball veterans who passed through the tutelage of late Gloria Udofia and some old students of schools like Aquina College Akure, Saint Louis Secondary school Akure, Oyemekun Grammar School and others .Fadeni added that the programme will become an annual event in memory of late Udofia’s contributions to the development of handball in Ondo/ Ekiti state and in Nigeria at large.

The General Manager of Ondo State Sports Council, Mr. Wande Fabuluje and his counterpart from Ekiti State, Mr Deji Samo described her as dedicated and a goal getter.

Mrs. Adebisi Bolanle and Mr. Omowole who actively played under her said she was a caring mother, disciplined and straight forward coach with zest for winning.

Bolanle added that late Udofia exposed her to most championships within and outside the country. While Mr. Omowole said he missed her doggedness, ruggedity, she was a good confidence builder, her winning mentality was second to none.

Trophies were presented to the winning state and personal awards went to some individuals who performed excellently in the competition.