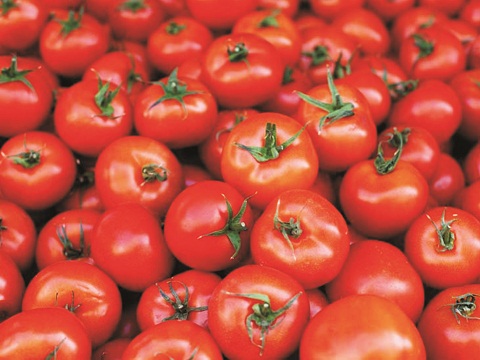 Sade Adewale
|
Tomato is considered both as a fruit and a vegetable and forms an integral part of cuisines across the globe.

They are usually red when mature, but can come in a variety of colours, including yellow, orange and green when it is not mature. It has been a good source of cure for all kinds of diseases in the body.

Speaking with a nutritionist, Mrs Jane Adeoye, she said tomatoes are the major dietary source of antioxidant lycopene, which has been linked to many health benefits, including reduced risk of heart disease and cancer.

She also said that they are a great source of Vitamin C, potassium, folate and Vitamin K.

According to her, fresh tomatoes are low in carbohydrate, saying that the carbohydrate consists mainly of simple sugars and insoluble fibers.

The nutritionist added that one of the Vitamins in tomatoes makes the tissues grow and allows the cells function well, adding that tomatoes is particularly important for pregnant women.

She hinted that the water content of tomatoes are about 95% while the other 5% consists mainly of carbohydrates and fiber.

Adeoye stated that tomato products, such as ketchup, tomato juice, and tomato-based sauces, are the richest dietary sources of lycopene.

She said that low blood levels of lycopene and beta-carotene are linked to increased risk of heart attacks and strokes which are the common causes of death .

Adeoye stressed that tomatoes protect the inner layer of the blood vessels and decrease the risk of blood clotting.

She posited that tomatoes prevent cancer, because cancer is a generic term for the uncontrolled growth of abnormal cells that spread beyond their normal boundaries, often invading other parts of the body.

According to her, high concentrations of carotenoids are found in high amounts in tomatoes and they prevent the development of breast cancer.

The nutritionist further hinted that tomatoes can reduce the amount of damage done to the body by cigarettes smoking.

Adeoye added that tomatoes contain coumaric acid and chlorogenic acid that work to protect the body from carcinogens that are produced from cigarette smoke.

She noted that tomatoes are good for the heart because of the Vitamin B and potassium in it while they are effective in reducing cholesterol levels and lowering blood pressure.

She said individuals should include tomatoes in their regular balanced diet, so that it can effectively prevent heart attacks, strokes as well as many other heart threatening problems.

According to her, tomatoes are good for the hair because of the Vitamin A that is present in it, saying that Vitamin A in tomatoes works perfectly to keep the hair shining and strong.

The nutritionist affirmed that tomatoes are good for the kidney when consumed, saying that it reduced the risk of kidney stones.

Adeoye explained that tomatoes is one of the best foods to prevent the development of night blindness and also improves the vision.

She further explained that tomatoes are valuable minerals known as chromium which works effectively to help diabetics keep their blood sugar levels under better control.

She stressed that tomatoes are immunity boosting agents as they help avoid common cold and influenza, especially for males.

She said that honey with tomato juice to make a thick paste can be applied on the face and wash it off after 15 minutes to get a smooth and glowing skin.

The cosmetologist stated that tomatoes can help in removing dead skin cells.

She stated that tomato are beneficial for skin health, and may protect against sunburns.

Also speaking with an hair dresser, Mrs Kemi Alabi said that tomatoes are considered to be a cure for hair loss. Also, the tomato pulp on the scalp can prevent hair loss by applying tomatoes juice (along with the pulp) to the hair and leave it for 20 minutes, then rinse as usual. Repeat three times a week.

According to her, tomatoes are natural conditioners. They provide natural shine to the hair and make it soft and manageable by taking a few drops of tomato oil and apply it on the hair to make it frizz free.

She added that tomatoes can help in bringing radiance and elasticity to dry hair, saying that individuals should mix tomato puree with oil and apply it on the hair. Leave it for 20 minutes and then wash it off. This will make the hair super smooth, shining and flexible as it contains high amounts of protein in it.