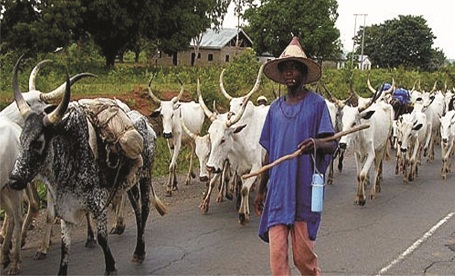 By Micheal Ofulue
|
The Ondo state government yesterday said it will continue to partner with relevant stakeholders and security agencies in its determination to fight crime and criminality  in the state, especially the unwholesome activities of some suspected Fulani herdsmen .

To this end, traditional rulers, community heads and the general public have been charged  to cooperate with the efforts of security operatives in the state, by giving useful information necessary to curb activities of herdsmen which is taking worrisome dimensions in the Southwest zone of the country.

The Senior Special Assistant to the state governor on Security Matters, Alhaji Jimoh Dojumo, spoke with The Hope Metro on the efforts of the state government in tackling crime in the state, especially the herdsmen activities.

He stated that the only panacea for crime reduction is for everybody to join hands with security agencies in nipping crime in the bud.

He said the present administration led by Arakunrin Oluwarotimi Akeredolu ,SAN, is committed to ensuring a sustainable peace and development in the state through effective partnership with all stakeholders in finding solution to every security challenge in the state.

He said the government from its inception has taken the issue bordering on security of lives and property of the citizens seriously, adding,  “that is the reason why it organized the last Security Summit, where all relevant stakeholders came together to discuss and proffer  solution to insecurity challenges confronting the state and the nation as a whole.

His words, ” I  was in Gedegede in Akoko North East to persuade the people in the community over an alleged invasion of the palace of the community’s traditional ruler, Onigedegede, Oba Walidu Sanni, by suspected Fulani herdsmen.

“I held a meeting with stakeholders over there and told them about government’s position and the  need to embrace peace. We are still going to invite them again for another meeting , because we want everybody to live in peace irrespective of his or her tribe.

“Government has frowned against night and underage grazing among Fulani herdsmen.  We have spoken to their leaders and they all promised to work with the state government to maintain peace in the state.

“What we are saying is that everybody should join hands in solving crime related issues. Security is everybody’s business and not the police alone,” he stated.

He urged the people to discountenance the fear that herdsmen had invaded Southwest zone, saying various measures have been put in place to address the issue.

It would be recalled that the Yoruba Youths worldwide and Afenifere have condemned, in its entirety,  the unwholesome activities of the herdsmen in states under  Southwest zone, in which they called on the people to defend themselves in the heat of provocation, also called on the federal government to be more proactive in tackling crime and criminality being perpetrated by herdsmen marauders.