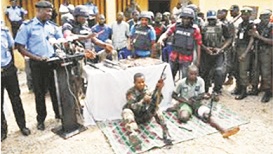 The Hope Metro authoritatively gathered that the suspected kidnapper, Imoru, was nabbed by some herdsmen in the forest, when he missed his way.

The seven-man gang was said to have been responsible for the kidnap of a Muslim cleric, Alhaji Jamiu Zakariyau and two others over the weekend at Ajowa Akoko. But the cleric miraculously escaped from the kidnappers den.

According to a source, the suspected kidnapper was caught when he approached the herdsmen to direct him to the road to the town from the bush where he was roaming about.

Sensing that he could be one of the kidnappers on the radar of security agents, the herdsmen arrested him and brought him to Ajowa and handed him over to the soldiers manning security in the area.

The suspect was said to have led the soldiers to his hideout in the forest, where he hid his gun which was recovered from him.

It was learnt that Imoru, who claimed to hail from Kwara State, confessed to being a member of the arrested kidnapping syndicate, behind the series of abductions in the area.

Meanwhile, residents of Ajowa, in Akoko Northwest Local Government Area of Ondo State have expressed happiness over the activities of soldiers on security matters in the area.

A monarch, the Oluro of Uro Ajowa Akoko, Oba Micheal Ipimoroti, gave kudos to security agents, local hunters and Fulani herdsmen, who he said have been patriotic and cooperative to the safety of life and property in the area

The suspect, it was learnt, had since been transferred to Akure for further interrogation.

Meanwhile, Alhaji Zakariyau, the cleric who escaped miraculously from kidnappers den in Ajowa over the weekend has reportedly fallen sick.

The Hope gathered that Zakariyau, who fell sick due to the torture, stress and psychological trauma he went through in captivity, had been hospitalized in an undisclosed clinic.

Zakariyau, a school teacher, was kidnapped in Ajowa at the weekend at about 8.00 pm while returning from the mosque where he usually led a Muslim congregation in prayers.

It would be recalled that security agents arrested some of the kidnappers after the phone seized form the victim was tracked and led them to the house of one of the kidnappers, said to be the son of a very popular chief and community leader in Ajowa, where the phones were hidden in the ceilings of the house.

The Chairman of Ajowa Akoko community, Mr Ajayi Bakare, has commended the efforts of the security agents and the way they unravelled the strange crime in a peaceful community like Ajowa.

Bakare urged parents to always monitor their children and residents and  always report  strange faces in the town.