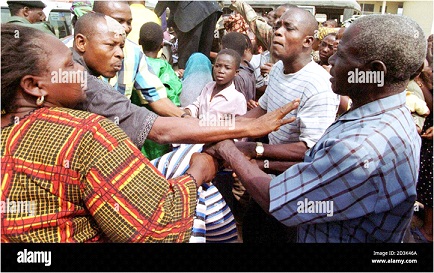 A 54-year-old spare parts seller, identified as Mrs Ebuka, was reportedly beaten to stupor by her customer , for hiking the price of her products at Car street in Akure Souh local government area of Ondo state.

The Hope Metro gathered that Ebuka ,who was described as a very tough woman in the area and always sells her goods beyond the normal prices, met her waterloo in her shop on Thursday, when she misbehaved to a customer.

It was gathered that  a man  walked into her shop with the intention to buy a fairly used part of a car and  while attending to the customer, Ebuka rained  insults on the man and asked her sales representative to bundle him out of her shop.

It was also gathered that in the process of rough-handling the customer as directed by Mrs Ebuka, the customer’s native outfit got torn.

An eyewitness, who is an Okada rider told our correspondent that he was at the shop trying to replace a faulty part of his motorbike, when the incident  happened.

According to the man who gave his name as Wale Oloruntoba, the shop owner rebuked the customer several times before he flew into a rage and slapped her, prompting her to fight back.

He also hinted that the angry customer made a phone call, and after few minutes, a group of men were seen entering the shop.

The men were said to have brutally handled the woman and her sales representatives, as they pushed  them to the floor, kicked and even threw a chair at them.

It was also noted that the boys who came with dangerous weapons  dragged the woman who owns the shop and beat her mercilessly while most passers-by looked on.

After beating the woman and her sales representatives, the customer and his boys entered his car  and zoomed off as normalcy automatically returned.

Some other shop owners who condemned the attack, exonerated themselves, saying they had told the woman earlier to reduce the price of her goods to normal, but she declined.