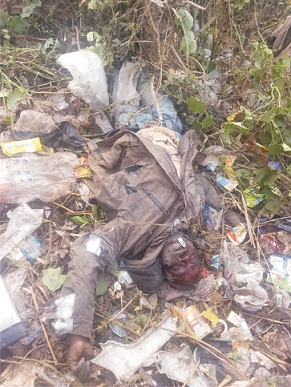 By Abimbola Akindunbi
|
A middle-aged man, who was identified as a commercial motorcyclists was crushed to death in the early hours of Saturday morning at Olufoam junction, Ilesha/Owo expressway, Akure.

The lifeless body of the man, yet unknown, was found by passers-by about 7.00am, lying by the road side, while his damaged motorcycle with the number plate  KAK 678 UM, was by the roadside.

By the time The Hope Metro got to the scene, sympathisers including  some commercial motorcyclists and motorists plying the road, had converged round his body trying to identify him.

Commercial motorcyclists interviewed said it is possible he was an Okada rider. But they could not ascertain his actual identity.

A motorcyclist said, “We went further to search his pockets if we could find his phone or anything that could assist us in  contacting his relations. But we couldn’t find anything.

One of the sympathisers had to put a call across to the men of the Federal Road Safety Commission (FRSC), who immediately rushed to the scene with their van.

The lifeless body of the deceased was then, laid at the back of the van and taken away.

A source who lives two poles to the scene, said the incident happened around 3.30am.

“I was awake about 3.30am. And suddenly, I just  heard ‘gbaa,’ the sound of a vehicle as if it collided with another vehicle.

However, unfortunately for the hit and run driver his number plate which fell on the floor of the road, was picked by the people around.