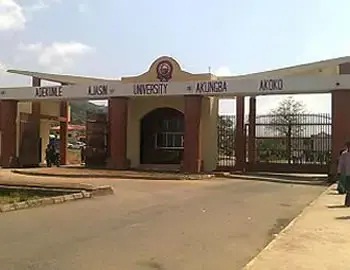 Some students of the Adekunle Ajasin University, Akungba Akoko, AAUA, have been attacked by hoodlums at Ogbese on their way to Akure to join the protest against ASUU strike.

An eye witness who spoke with our reporter on the incident hinted that some of the students sustained injuries during the attack and were rushed to an undisclosed hospital.

In a comment by one of the students, Ogade Mojisola, students’ Welfare Director of AAUA condemned the attack on the students; she said the students were on their way to join the protest in Akure when they were attacked.

“They were attacked and the student Union General Secretary of Adekunle Ajasin University, Comrade Adeyefa Tolulope (Elite) was rushed to the state hospital, Akure,” she confirmed.

As the students protest however entered the second day yesterday, they vowed not to vacate the Ilesa/Akure highway, until the strike is called off.

It was also gathered that soldiers traveling on Akure/Ilesa highway yesterday disrupted the protest, dismantled the canopy and barricade erected by the protesting students.

It was learnt that the students returned as soon as the soldiers left.

Students across three universities in Ondo state blocked the Ilesa/Akure highway in the state.

The students were seen chanting Aluta songs and displaying placards with inscriptions. Some of the inscriptions read, “End ASUU strike”, “Save our future,” We have had enough”.

Some motorists and travellers were stranded on the highway, while the students were spotted cooking food and dancing to songs played by a stand-by Disc Jockey.

Speaking with The Hope on the action of the students, Chairman, National Association of Universities Students, Ondo State Chapter, Comrade Taiwo Oluwagbogo said ASUU had embarked on countless strikes since 1999, yet the government failed to meet their demands.

Taiwo maintained that it was time for students to put a stop to the incessant strike, saying completing a four years bachelor’s degree without any interruption was not possible in Nigeria’s system.

He said that they would not leave the road until ASUU called off the strike.

“I’m a student and it was very bad that the agreement between FG and ASUU since 2009 has not been concluded. I am not here to support the federal government or ASUU but to protest and agitate for resumption.”

“They have wasted our time, our house rent and school fees. Everyday, we are getting older and we females would one day get married, but if we do not graduate on time, when are we going to marry?”

Recall that ASUU has been on strike since February 14, 2022, seeking, among other things, the fulfilment of the 2009 agreement struck with the Federal Government.