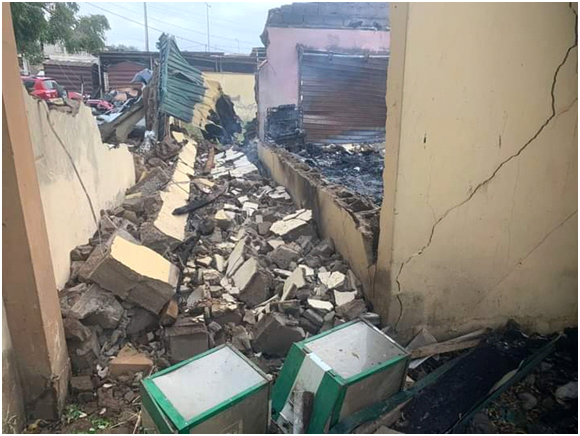 Some suspected hoodlums have reportedly set ablaze the offices of the Independent National Electoral Commission (INEC) in Ogun and Osun States.

Sources told The Hope Metro  that the arson was first carried out in the late hours of Wednesday to the early hours of Thursday at Iyana Mortuary in Abeokuta, the Ogun State capital.

Also, the arsonists were reported to have touched the INEC office in Osun State situated at Oke-Iresi, Ede South Local Government Area of Osun State in the early hours of Thursday.

In Osun, it was learnt that the hoodlums scaled the perimeter fence, jumped into the premises and set the INEC building on fire from the back.

The Hope Metro reliably gathered that the hoodlums “soaked loaves of bread with petrol and threw same into the buildings at different angles to light up the INEC offices.

The fire fighters and the police in the two states were able to put out the fire.

Meanwhile, the Independent National Electoral Commission (INEC) says it will hold an emergency meeting of the Inter-Agency Consultative Committee on Election Security (ICCES) over the recent attacks on its offices across the country on Friday.

This came  a few hours after hoodlums set ablaze INEC offices in Ogun and Osun states.

“In the Ogun office, some  non-sensitive materials were also affected by the fire, but no life was lost and no injury was sustained in the fire,” an official said.

Confirming the incidents which occurred in the early hours of Thursday, the electoral umpire, in a statement issued by the commission’s National Commissioner and Chairman Information and Voter Education Committee, Festus Okoye, said all the commission’s movable assets in the office in Abeokuta, the Ogun State capital, were destroyed.

He disclosed that the INEC office in Abeokuta was razed at about 1:15 a.m. after the assailants overpowered the security personnel on duty.

He noted that the INEC office in Ede South Local Government Area of Osun State was also attacked and set ablaze on Thursday, adding that the damage to the commission’s office was limited to a section of the building.

According to him, only some furniture items were destroyed.

“The attention of the Nigeria Police Force and other security and safety agencies has been drawn to the incidents and they have commenced investigation.

“With just 106 days to the 2023 general election when the commission has commenced the movement of materials to our offices nationwide, these simultaneous attacks are very worrisome indeed.

“Similarly, the rising incidents of attacks on supporters of various political parties since the commencement of campaign barely two months ago and the use of hate and incendiary language by some politicians are extremely disturbing.