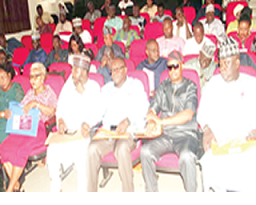 By Bukola Olamona
|
The 37th National Executive Committee (NEC) Congress of the Senior Staff Association of Nigerian Universities (SSANU) holding at Adekunle Ajasin University, Akungba Akoko, is another testament to the rising profile and clout of the Ondo State-owned Institution in the comity of Universities in Nigeria.

This was the submission of the Vice Chancellor, Prof. Igbekele Ajibefun while addressing newsmen at the end of the opening plenary of the Congress.

Ajibefun, who was represented by the Deputy Vice Chancellor (Administration), Prof. Olugbenga Ige, said it was noteworthy that the Congress is holding in AAUA for the first time.

The Vice Chancellor added that, “This shows the kind of understanding and mutuality of ideas between the University and her staff unions. For us, the welfare of staff is paramount; that is why this administration has focused keenly on the issues of welfare of our staff.

“And I think SSANU recognizes this and decided to bring its National Congress here for the first time ever. It shows that our University is peaceful and that we have a robust engagement with all staff unions. This is a good development that should continue.”

Prof. Ajibefun advised the gathering to focus on issues that border on welfare of their members rather than engaging in political grandstanding.

He called for a symbiotic relationship between teaching and non-teaching staff in order to engender innovations and development in Nigerian universities.

Also speaking, the Branch Chairman of the association, Com. Temitope Famuti, expressed the hope that the human capital development benefits associated with hosting the NEC would be realized.

Famuti thanked the University Management for sustaining regular payment of staff salaries as and when due despite paucity of funds and other competing demands. He added that, “Staff welfare has been given priority. The hazard allowance which was hitherto suspended was reinstated in full under this administration. Deserving members have always received their promotions.”

He also took time out to list other pending demands of the union while calling on Management to expedite action on them.