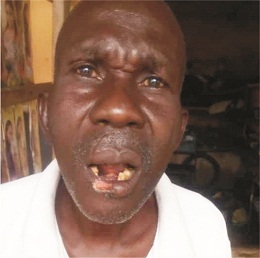 By Tola Gbadamosi
|
A tenant, Mrs Yemi Daramola, is now in police custody for biting off the lip of her 63 years old landlord, Mr. Paul Ajayi, during a misunderstanding over unpaid rent in Akure, the Ondo state capital.

The incident was said to have occurred last week at Fanibi area of Akure metropolis.

An eyewitness told The Hope Metro that the suspect(Yemi), is the wife of one Ojo Daramola, who rented a room apartment from the landlord.

The couple had been living in the house for more than three years. But recently, they had issues with the landlord over their failure to pay rent for over a year.

The source said, “I suddenly heard noise from the house and found the landlord’s lip cut off, while his cloth was soaked with his own blood. But a part of the lip was still on the suspect’s mouth.

The Hope Metro further gathered that Mr Ajayi had met with the family the previous night to ask for the overdue house rent. But Daramola was said to have promised to see him the following day.

Ajayi, a cobbler said, “they owed me 18 months rent and I went to meet her husband when he arrived from work at about 8pm in the night.

“Her husband begged me to exercise patience, that he would see me the following morning.

“I warned them to stop postponing payment because I have been asking them to pay till the rent piled up to eighteen months.

“The following morning, her husband came to beg me. But I insisted that they have to pay.

“Thereafter, I saw off my friends that visited me. So, as I was coming back, the wife suddenly attacked me. She hit me and tried to hold my scrotum.

“As I was trying to bend to save my scrotum, she bit my lips and cut it off.

“That was when I reported the case at Fanibi Police Station, ” Ajayi narrated.

According to the landlord, that was not the first time the suspect would attack neighbours whenever she had misunderstanding with them.

“Three years ago, she bit her step son and was arrested. But it was later settled.

Last year, she also injured her co-tenant, who was later taken to local orthopaedics for treatment.”

He explained that the case would be taken to the magistrates court in Akure, this week.

Confirming the incident, the Police Public Relations Officer, Ondo state command, Femi Joseph, said he had not been fully briefed on the matter.

Mr Joseph, however, explained that once it had been established that the case is in court, the Police must have prosecuted the suspect.

Meanwhile, the Dental department of the State Specialist Hospital in Akure, has recommended a plastic surgery for Paul Ajayi, which will require the sum of #500,000 (five hundred thousand naira), to carry out surgery on his lip.

The victim has therefore been referred to the Obafemi Awolowo University Teaching Hospital in Ile-Ife for the surgery.

A referrer letter signed by Dr Olasehinde and addressed to the plastic surgery team of the OAU Teaching Hospital, read; “Ajayi, age 63, Male, suffered avulsion of the lower lip, when his co-tenant bit him on his lip.”