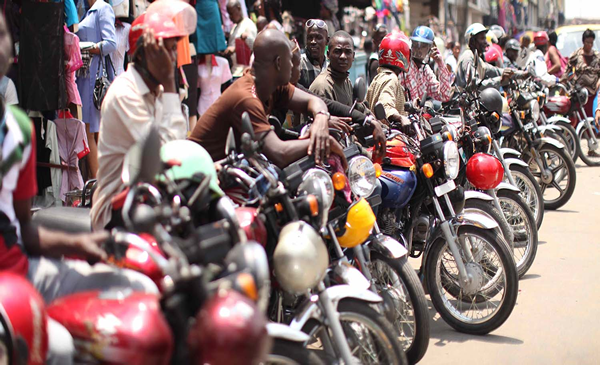 By Kayode Crown
|
Last year October, the Ondo State government suspended the activities of commercial motorcyclist (okada) unions in the state. Subsequently in April this year, it started the sales of daily tickets to okada riders in the state, which was something that the unions used to preoccupy themselves with.

Before the suspension of the union activities on the roads, it was tales of woes that the hard-working Okada riders have to tell because of arbitrary charges demanded by the unions.

After the normal ticket, which goes for N150, is collected in the morning, in the afternoon, the sellers usually demand, under the euphemism of “money for chairman’s food”, which can range from N50 to N100.

Not stopping at that, there is what is called “emblem”, a square-shaped identification tag which  rate was N500 and is sold by the subdivisions of the union, each with his own unique one. Therefore, if you are without the emblem of a particular division, you are not allowed as an Okada rider to take passengers to that part of Akure, where the divisional leadership of the union is in charge.

As an Okada rider, if you want to be free to take passengers all across Akure you may need to get not less than four different emblems, which were sold quarterly. Just as the average Okada man had to cough out N2000 a year to buy the emblem, if you want to freely to move all across the town, you may have to cough out N8000 per year as the price of that freedom.

At the weekend, Special Focus spoke with a dozen Okada riders across the town, and they could hardly hide their joy and relief that the State government had taken over the dally sales from the union.

They recount gory experiences under the old way of doing things. They say that any attempt to resist the different charges of the union is greeted by stiff resistance, and fight commonly breaks out on the street between the ticket collectors and the Okada riders, and their motorcycles are commonly thrown into the gutter and get damaged in the process.

In short, they have nothing good to say about the era of the unfettered rule of union in the state, as they feel it was a serious burden on them.

You can see and feel the relief in the eyes of the Okada riders are they speak of how a heavy burden have been lifted from their shoulders with the suspension of the activities of the commercial motorcyclists association. No one related any benefit the association gave to them. They are all well aware that it is those who somehow find their way to become the leaders of the union who get to live large on the sweat of the others and that is how it has been for a long time, as they act and make demands with a sense of entitlement and an oppressive air.

To them, the most important part of the development is the peace of mind. After they have collected the ticket in the morning for N150 they can freely move around the town and even the state if they want to take passengers from one part to the other.

They are no longer afraid that the ticket collector would burden and terrorise them with demands for money for “chairman’s lunch”, money for emblem, things, they say, are usually sprung on them unawares. They are now free from undue harassment from those they regard as seeking to extort money from them.

The Okada riders are happy to contribute to the development of the state in the little way they can rather than just contributing money to swell the pocket of some who have made themselves their overlord, who to ascribe to themselves millions of Naira without being questioned, as they continue to live large at the expense of the numerous Okada riders, with money that are largely unaccounted for.

Special Focus investigation reveals that in Akure, it is largely the same crop of people who were ticket sales agents for the union, who are performing the same role for the government now.

While the Okada riders are full of praises for the government, the ticket collectors are not similarly impressed and have the opposite to say.

Before now, as they recount to Special Focus, N40 used to be their cut from a ticket of N150, but now the government only allows them to keep N20 for themselves, which is a 50percent reduction. They are sorely lamenting this.

They are not oblivious to the fact that the new arrangement considerably favours the Okada riders and severely eats into the gain they used to get. They may be wishing for the “good old days”, but the Okada hardly allows that thought to come into their hearts, and wish to forget what they regard as an evil, oppressive past.

Special Focus findings reveal that the government pockets N100 from the N150, and that the number of Okada riders in Akure can conservatively be put at 7000. So if 6000 of them are on the road on any particular day, it means that the government gets to make N600,000 a day from ticket sales to Okada riders which directly adds to the IGR of the state rather than go into the pockets of a few of the leadership of the union, as the case may be, who see the Okada riders as their ATM, and the ticket sales agents on the road as their enforcers.

Putting biro to paper, all in all, apart from the freedom of movement, the government have saved Okada riders N100 per week of direct ticket sales, which is N5200 per year. The arbitrary money purportedly for “chairman’s food,” another N300 (N50 per day for six days in a week) per week, making N15,600. The emblem is N2000 per year (one per quarter, N500 each). Adding the three together, it gives a total of N22,800 a year.

And multiplying that by the conservative estimate of the number of the Okada riders in Akure, 7000, we can conclude that government’s intervention has directly put N136.8m into the pockets of Okada riders in Akure yearly and that is N11.4million monthly. The government has truly lifted a burden off the shoulders of thousands of Okada riders. Asked if they would want the union to come back to sell tickets to them on the streets, with one voice they said a resounding no.

After the suspension of the activities of the commercial motorcycle association in October 2017, Ondo State governor, Oluwarotimi Akeredolu saddled the office of the Senior Special Assistant to the governor on Special Duties and Strategy, Dr Doyin Odebowale with taking action on the matter.

Dr. Odebowale immediately directed that all okada unions operating under the umbrella body COMRA which comprises ACCOMORAN, NATOMORA, OSOBRA, Okada (RTEAN), Okada (NURTW) desist from collecting tickets of whatever description, from any unauthorised persons, and that all operators are to await further directives in ticketing from the government.

And earlier in the year (April), Dr Odebowale announced that the government will commence sale of tickets at N150 to commercial motorcyclists and N400 to tricyclists for daily operations and announced the names of the local government coordinators for such in each of the 18 local government areas in the state, charging each not to regard themselves as chairmen of Okada operators in the LGAs.

And after the government took over the ticketing in April this year, Amalgamated Commercial Motorcycle Owners and Riders Association of Nigeria (ACCOMORAN) in July reportedly sued the government, saying the taking over of the N150-ticket sales by the Board of Internal Revenue was unconstitutional and illegal.

Reacting to this in a telephone chat with Special Focus at the weekend, Dr Odebowale said that the government did not ban any union, saying unionism is voluntary, “anybody who belongs to a union can go to the office of the union and pay whatever he or she wants to pay, but nobody will be allowed to stay on the road and extort money from our people. We have banned all illegal activities on our roads, in our state, let anybody go to court, go to anywhere, after court, concerning that. We have not banned any union, the government has not done that.

“What the government is saying is that nobody should use Okada for any criminal activity and it is within our rights to say so and we are enforcing that, we are saying that nobody will ride any Okada that is not registered.

“It is within our rights to know those who operate in our state. And we are also saying that if you use our road, carry our people, interact with them, you should also buy tickets from us, so anybody who now says that is beyond the scope of governance should go to court, we will meet them there.”

He disclosed that the role of his office is to ensure that everything is done properly with regards to the money collected for tickets from Okada riders.

“What we do is to ensure that they pay to the bank, to the designated account and they bring the teller to our office, and they then go to collect the ticket from Board of Internal Revenue. That has been the mode of operation since we started.

“I tell you we have gotten close to N300m since we started in April. We have made well above N280m, and we started on the 25th of April. That was when we started and we’ve been unable to collect throughout the state because of paucity of personnel. We don’t want to just proliferate tax force teams, otherwise we would have made much more than that.”

On how the appointed coordinators in each of the18 local governments have been performing, he said that“some of them need close monitoring. We have been prosecuting some. There was one we appointed in Ondo West, we later removed him. He’s in court now, because we found fake tickets with him and there are others in the southern senatorial district being investigated. On the whole the performance has not been very bad.”

On why the government suspended activities of the union in the first place, he said that people were  “using Okada to kidnap our people, to give hints to armed robbers, and they seemed bent on wrecking the peace. No responsible government will seat down to watch that happen.

“Above all, the revenue accruable to the state from the operatives of Okada before we took over was N400,000 a month, but within four weeks when we started selling the tickets, we got up to N45m, and as I am speaking with you, we have made over N280million within this short period of time.”