How I fell in love with Elemure Ogunyemi’s song -Daughter 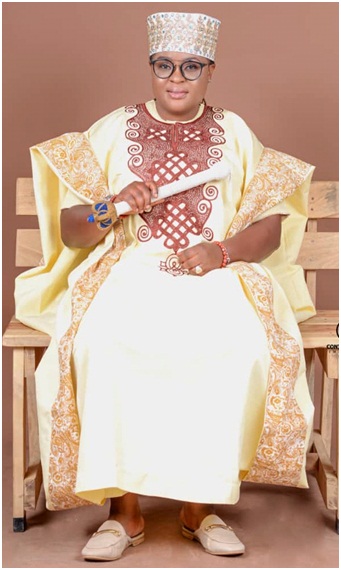 A traditional musician, Oluwafunmilayo Elemure Ogunyemi, with the stage name, Erelu Elemure has said that she inherited music from her biological father, late Elemure Ogunyemi.
According to her, music is what she loves most, saying she fell in love with her father’s songs and developed her interest in it.
She disclosed that when she started singing her father did not support her, with the believe that “Erin o le maa fon, ki omo re tun maa fon” but later he supported her music career.
During an interview with Friday Extravaganza, the artiste noted that when she started she hid it from her father because he must not know that she was into entertainment.
According to her, she grew up as a child of a popular musician and became a lover of music.
Erelu Elemure said she started her music career with highlife and Fuji music but after her father’s death she started singing traditional music.
Her words: “Then if have a show close to our house, I will not do it or if any of my father’s friends sees me at the show I will go back to that person and begged him or her not to tell my father because I was afraid of my father.”
Erelu Elemure stated that she was able to wax two albums since she started her music career titled; ‘ONALA and AJAGBO.
She disclosed that finance is one of the challenges she is facing to make her dreams come true in the music industry.
“I have been singing since my childhood but professionally, I will be 16 years this December. Apart from music, I also make traditional caps as a hobby”
She mentioned Elemure Ogunyemi, Alhaji Abass Akande Obesere as her mentors in the music industry.
The graduate of accounting from the University of Ado Ekiti noted that if she listens to her father’s music, she will receive her inspiration.
“I thank God for my life because when I was in secondary school I told my parents that I wanted to be a footballer because I could play football very well, I love to do things like a man I believe what a man can do a woman can do better. If I’m not into music I would be a footballer.
According to her, Nigerian music industry needs urgent prayer because nobody is ready to help and we have a lot of people that are talented and need helper but nobody in Nigeria can give you without return.

How to enjoy God's help