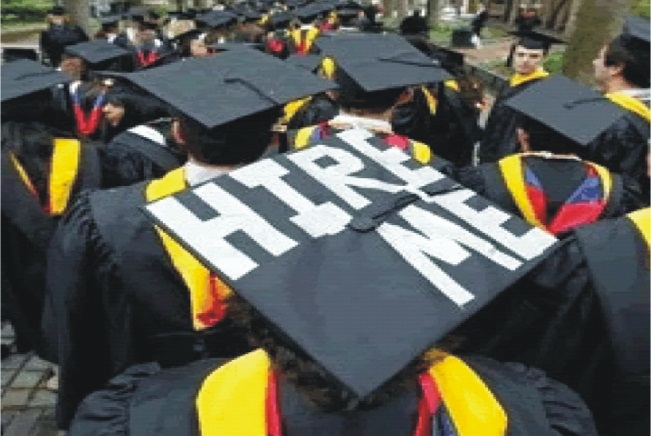 Recently, the National Bureau of Statistics (NBS) said in its latest unemployment report that about half of the nation’s 76,562 doctorate degree holders within the labour force were either jobless or underemployed.
According to the NBS, 7,999 PhD holders have been added to the unemployment market in 21 months – 381 PhD holders per month.
Apart from those with Ph.Ds, the report also reviewed that 119,513 Nigerians with Master’s Degree are unemployed and 2,844,811 with Bachelor’s Degree are also unemployed.
It’s not a new problem in July last year, an NBS report showed that there were 70,739 Ph.D holders in the last quarter of 2017 and 72,146 in the third quarter of 2018.
There were 9,832 unemployed PhD holders in the third quarter of 2018, a figure that increased from 7,817 reported for the last quarter of 2017.
The unemployment rate for Ph.D holders was 13.6 % and triples the international rate of 5.6%.
Many disprove the NBS, saying holders of Ph.Ds cannot be unemployed, believing that students who enroll in PhD programmes often have a certain level of financial stability before they do so, and only a job could guarantee that.
Unfortunately, it isn’t always true.
Rasheed Adigun has not worked since April, despite bagging a Ph.D late last year. In fact, when last he worked, he was paid ₦48,000 for the month.
Despite having two masters degrees and a PhD, 33-year-old Dr Helana Darwin is unemployed. The young lady took to Twitter to express sadness over her situation, saying education is overrated and that she feels she went about her 20s all wrong.
She wrote: “How am I at 33 with two MAs and a Ph.D and still so precariously situated on the job market? I feel like I went about my 20s all wrong… maybe-just maybe-higher education is overrated?”
To survive, some Ph.D holders have even veered into President Muhammadu Buhari’s fiscal stimulus measures in response to the COVID-19 pandemic.
Gbenga Obadara, Ogun State Chairman of Special Public Works, said, “Four Ph.D and master’s degree holders have applied. Poverty is ravaging. Unemployment is extremely on the high rise. People with master’s degrees and even PhD degrees are applying for 20,000 jobs. That is the problem.”
Five years ago, Prof. Julius Okojie, the Executive Secretary of National Universities Commission (NUC) said at interactive dinner with newsmen in Abuja that it was worrisome that Ph.D holders were unemployed when their services were needed in the universities.
“It is amazing seeing the number of Ph.D holders that come to my office and say they are looking for jobs,” he had said.
And it’s not just a Nigerian problem.
Last year in Pakistan, Ph.D scholars held demonstrations outside the residence of Prime Minister Imran Khan, where they burnt photocopies of their degrees during the protest, as they had done previously in October 2018. Some even chanted “Give us jobs or we will commit suicide,” according to local television reports.
Young doctoral graduates in South Korea are also facing hardship and are struggling to get a job. Official data showed that one out of five doctorate graduates in 2017 were without a job, the highest rate since data collection on this trend began in 2014.
According to the Korean Statistical Information Service, the figure was 21.3% in 2014, 20.3% in 2015 and 21.6% in 2016.
In the United States, too many Ph.Ds holders lend up unemployed.
According data from the National Science Foundation, 80% of Life Science PhDs end up completely unemployed or in low-paying post-doctorate training positions, which the government does not count as employment.
Some believe that students who enrol in Ph.D programmes often have a certain level of financial stability before they do so, and only a job could guarantee that.
“The statistics that NBS released is worrying, and I am doubting the credibility of the research,”said one of them.
“Significant numbers of students with Ph.D in Nigeria are already employed before embarking on the course.”
Why are Ph.D holders getting unemployed.
Experts say part of the problem lies with the slow rate at which the Nigerian economy is creating formal jobs. For instance, in 2015 alone, about 251,000 formal jobs were created, whereas popular estimates show that Nigerian universities produce 500,000 graduates annually. The same situation applies today. Apart from the slow rate of the economy, key sectors are shedding jobs. About 350,000 jobs were lost in the petroleum downstream oil sector following the 2016 economic recession. Many more have been lost though the coronavirus pandemic.
A young and growing population does not help matters. Essentially, too many people are chasing too few jobs. While Nigeria’s labour force grew by nearly 4% between 2010 and 2017, jobs grew by 1.6% in the same period. The future remains bleak for Ph.D holders if formal jobs are not created at a faster rate, considering that the country has a young population and many people Ph.D holders are still in school.
Another reason why Nigeria has so many educated and jobless people is that there is a mismatch between the skills that they have and the skills needed in the jobs available. They say there is a wide gap between theory and practice in universities, such that it becomes difficult to apply taught courses to real-world issues. Instances have been given of people who graduate with a degree in computer engineering never having used a computer.
According to an online report, most private universities have frozen departments, fired workers, etc to avoid paying them, during this COVID-19 pandemic.
On the bright side, the lack of jobs for educated Nigerians is fostering a sizeable entrepreneurial class, with roughly four out of five employed Nigerians working for themselves, according to the World Bank.
Whether this can sustain Ph.D holders is another matter.