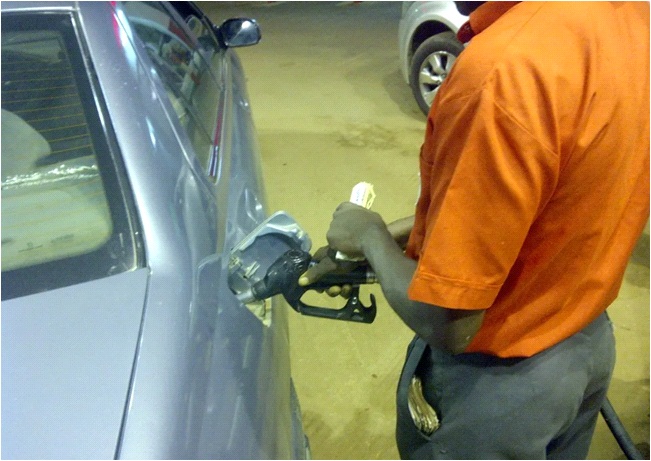 There have been complaints by vehicle owners about sharp practices of petrol attendants when attending to them.
A cross section of drivers who spoke with The Hope lamented that they had noticed sharp practices at one time or the other but said that there was nothing they could do since they have no evidence to prove such foul play.
The drivers lamented that petrol attendants are short-charging buyers, they also refuse to sell at the official pump price displayed on their dispensing machines. Some likewise engage in selling adulterated fuel mixed with water, palm-oil or diesel which affects vehicle engines and making car owners to spend more money on repairs.
An Akure based driver, Mr Omowole Arise, hinted that many filling stations across the state doctored their metres and do not dispense correct litres to their customers. He said that the petrol attendants believe that is the only way they can augment their meagre salaries. Some of the filling stations, in order to achieve their deceitful act will not want to sell to customers with kegs .
He said, “exploitation of customers by these attendants became more pronounced during fuel scarcity. They capitalised on the situation to cheat vehicle owners since what mattered most to buyers at that rushing time was to get fuel. Several times, customers were cheated under their close watch without knowing. This is done when the metre is adjusted, with the support of some of their managers, who would later get their own share of the abnormal profit.” he said.
Another driver, who gave his name simply as Wale appealed to vehicle owners to be mindful of where they fuel their cars as he revealed that most filling stations across the state are culpable of this. He said,” sometimes, you will buy petrol and later discover that it was mixed with water. Some petrol that you will buy and later discovered that it was majorly water mixed with petrol. Some fuel will look like palm-oil or smell like diesel. That is why motorists avoid buying fuel in some filling stations,” he said.
A businesswoman, Mrs Bunmi Damilare, who once fell victim of fuel attendant sharp practice, explained that she was not aware of such tactics until recently.
Her words, “Two years ago when the country was experiencing petrol scarcity, I bought fuel of N2000 at N250 per litre at a filling station with the hope that it would last for a week since I didn’t use the car always. Besides, anytime I bought N2,000 worth of fuel, it would last me up to a week and two days.
“To my surprise, the fuel finished after five days, I told my neighbours and they said that the fuel attendant had short-changed me. I wanted to go back and complain but they did not open for sale until after a month. It was quite a bitter experience and I vowed never to patronize the filling station again. I even told some of my friends to avoid buying fuel from the filling station,” she narrated.
The Hope met a petroleum attendant, who spoke under the condition of anonymity due to the sensitive nature of the topic. The lady revealed that there are many ways fuel attendants cheat customers to make additional income because they get peanuts as monthly take home.
Her words, “when we resume like any other business, we take the opening reading on the fuel dispenser and do the same when we close. Then, we multiply the difference in the readings by the cost per litre, which is the amount to be delivered to the manager. Any change left belongs to the attendant and if there is a loss, the fuel attendant will be held responsible. As such money will be deducted from the attendant’s salary.
“If a customer buys N500 fuel and another customer want to buy the same amount of fuel, there is a button we press to re-call the last sale which will appear on the fuel meter since it is the same price. Such a customer cannot know that it was the last sale that was re-called. But if the price is different from the last sale, what we do is to watch when the customer is not paying attention and quickly sell less than the quantity the customer want to buy and immediately press stop or cancel and then press O.K. The actual amount the customer want to buy will appear and that is what the customer will see on the metre believing that the sale is complete which can be done in less than a minute.
“Another way is faking the hanging of nozzle to deceive unsuspected customers. Even if the customer is watching, it will be difficult for him/her to notice. Customers are also short-changed when the attendant fails to rub-off the metre before starting the sale of another fuel.” she disclosed
The lady stressed that not all fuel attendants are involved in the act. She also maintained that not all filling stations short-change their customers. She finally advised customers to be watchful while in any filling station and insist that the metre be rubbed off before starting a fresh sale.