How safe are roadside food vendors? 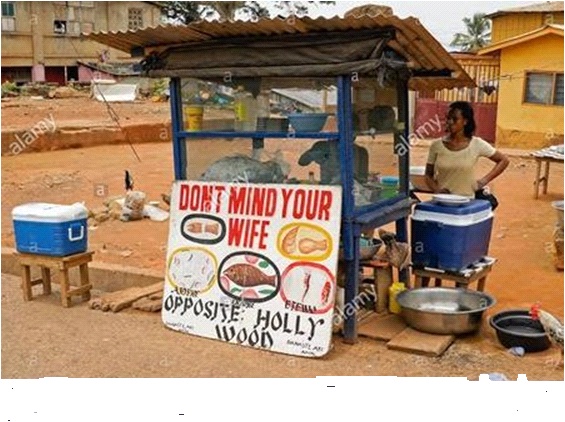 Patronizing roadside food vendors despite the health risks is gradually becoming a way of life among Nigerians, especially the low income earners. At different motor parks, popular junctions and businesses areas, these food vendors, popularly called ‘Mama Put’ in local parlance, set up their business in the open space with their numerous customers surrounding them like bees around a honey pot. Some of them erect sheds made of planks to shield their customers from rain or scorching Sun.

At bus stops, motor parks, under the bridge and along the streets, people are seen patronizing the food vendors. The “rush hours”, when many customers patronize them, are between 7 am and 10 am when pupils and students are on their way to school, and in the evening from 6 pm.

A salary earner, Mr Ibukun Akintan, explained that he patronizes them, not because he could not afford fast food restaurants, but because he love the taste and flavour of the food sold at Buka joints.

He said: “ Some foods sold in Buka joints are usually not available in some of the fast food outlets. Also, when I’m on the move and hungry, I can easily satisfy my hunger with a sumptuous meal from a nearby Buka. Moreover, some fast foods restaurants microwave leftovers and sell them off to customers. Mama-put joints provide me with hot, fresh and original pounded yam which many restaurant cannot offer. I love the local dishes served at those joints, together with the freshness and originality. One good thing about mama-put is that they hardly sell leftovers; their foods are served fresh.”

Sharing a similar view, an artisan, Mr Babatunde Oriola, said that he enjoys eating at roadside canteens because he is still single and hates to cook. Another reason, according to him, is because the foods are cheaper, compared with standard restaurants. “In a standard restaurant, one is likely to spend about N2,000 for a meal, but N600 is more than enough for a meal at the mama put’s place.

He added,“I prefer road-side-food to high end restaurant for a number of reasons. One is that it is usually very cheap and affordable. You can get whatever you want to eat for as low as N200, unlike what obtains at high brow restaurants. Another reason is that the nature of my job demands that I get to work very early, which I cannot do without eating. As a bachelor, I hate to cook. May be when I get married it will stop. Besides, at roadside restaurants, everybody is equal. There is no segregation based on class. No matter what you are in the society, you will be served the way others are served. In big restaurants there is room for preferential treatment.

A trader, Ms Muinat Arowosafe, hinted that she turned to roadside food vendors whenever she could not make it to the kitchen, due to one reason or the other. “I eat from ‘mama put’ when I’m out or when I’m too tired to cook. Also, their food is more affordable compared to most restaurants. I like the aroma and flavor. My favourite is egusi or vegetable soup. It’s affordable. With N500, you can eat good food at a ‘mama-put’ joint.

“Health experts have warned against eating food prepared by the roadside vendors or hawked on the streets, that they could be unhygienic and unsafe, especially if they are exposed to flies that bear disease-carrying germs. However, these days, most mama-put owners keep their environments clean. I mostly patronise mama put joints when I’m far from home. I also eat there when I don’t like taking food from the house to work.  But I do it wisely. I pick the kind of places I go to buy food to avoid food contamination and poisoning.”

A businesswoman, Mrs. Stella Omodafe, said that she strongly prefer roadside food sellers to big restaurants because the possibility of someone eating stale food in big restaurants is higher. “I have never heard anyone complain of eating spoilt food at mama-put joints, but we have heard a lot of people said that about all these fast food restaurants and eateries. My point is that most of the things they use in preserving the food in big restaurants make it a big threat to health. Besides, an average Nigerian like myself can’t afford patronizing restaurants, unless on special occasions,” she said.

A commercial driver, Mr Temitope Olotu, who also patronizes roadside food vendors disclosed that most Nigerians patronize them on a daily basis because they are always available and their prices are affordable.

He said: “I don’t have the financial capacity to eat in a big restaurant. Roadside food vendors are put in place for someone like me. I wake up 5 am every day as a commercial driver to go out and look for passengers. My wife will still be sleeping by that time, and I cannot wait for her to cook, due to the nature of my job. Besides, I don’t like eating very early. I will not be at home by the time my wife will be through with cooking. The only option is to patronize roadside food sellers.

“Aside the fact that I leave home very early, roadside food vendors are preferable because they are cheap, compared with what is obtainable at the restaurants.  A lot of them cook better than those operating big restaurants. I really do not worry about the health implications, as long as the food is tasty, enjoyable and affordable.”

A medical practioner, Mrs Omowumi Osuji, while advising Nigerians to be careful with roadside food vendors, said the fact that roadside prepared foods are ready to eat and relatively inexpensive makes many people to patronize them.

Osuji warned that people who patronise street food vendors need to be aware of the dangers of eating or buying foods prepared in an unclean environment, saying such foods could be contaminated with microorganisms, which are present in the air, water and the hands of those who sell them.

Her words: “Basically, food or waterborne diseases with predominant feco-oral transmission are the main sources of concern. food poisoning caused by Staphylococcus aureus or bacillus cereus, are two of the most common types of bacteria food poisoning. Diseases such as typhoid fever, dysentery, and cholera could be contacted through foods bought from the roadside.

“Another major public health concern is the use of adulterated, low quality or unsafe ingredients to cook these meals in order to maximise profit.  The major challenge of street food vendors is that they do not adhere to basic rules of hygiene in the preparation of their foods. Most places where the foods are sold are very unhygienic. There are flies, carbon fumes and dusts in the air, which settle on these foods and make them unsafe for human consumption,” she said.