How SARS officers killed my brother over N120,000 -Petitioner 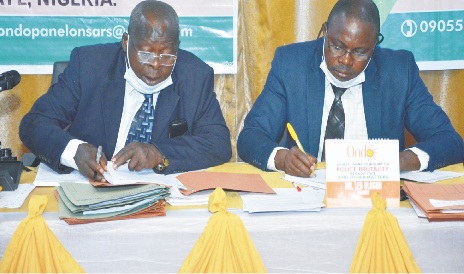 Officers of the defunct Special Anti-Robbery Squad, SARS have again been fingered in a case involving extrajudicial killing of one Gbenga Aremo on May 26, 2010.
Sister to the victim, Mrs Jimoh Bosede yesterday told the Judicial Panel of Enquiry on Police Brutality and Other Matters in Ondo State that the victim was arrested at a beer parlour.
She revealed that one officer Tajudeen, aka Oloriebi asked her to bring N120,000 for his release but she later heard that Aremo’s body had been deposited at the mortuary by SARS operatives, adding that it took the intervention of traditional leaders and politicians for his corpse to be released.
The petitioner’s counsel, Anthony Adanlawo called three witnesses to testify to the claim, stating that the police was complicit in the act.
However, the police counsel, Tolu Abisagbo said that the police could not identify any officer with the appellation, Oloriebi, stating that police keep records of officers’ real names, not their aliases.
Similarly, two other petitions on extrajudicial killing by the Nigerian police were also heard as petitioners demanded compensations.
Mrs Solape Adeusi, whose husband, Mr Kazeem Adeusi was allegedly shot dead by an alms seeking police officer at a checkpoint on Owena-Akure road on December 28 2006 approached the Judicial Panel for justice.
Counsel to the police Tolu Abisagbo informed the court that the case the police have against the alleged officer, Godwin Arimashure on extra judicial killing was that of one Adekunle Olaiya Falade not Kazeem Adeusi.
Counsel to the petitioner, Dayo Adejumola however objected to the claim of Abisagbo, saying the case was for Adeusi as Mr Falade was the second party in the car with him when he was shot in the head by the police officer.
Adejumola thereafter applied for a subpoena to be issued and served on Mr Adekunle Falade to appear before the panel and give his testimony on the 24 February while also seeking for 50 million naira compensation for his client.
Another petition filed by Mrs Deborah Ogunsakin on the killing of her husband by a police stray bullet was closed for recommendations to the state government while that of Chief Patrick Akintoye, Mr Clement Owoyemi and Mrs Cecilia Alao were adjourned to 24 February for definite hearing.
Also, a Muslim cleric, Abdulazeez Adebayo asked for five million naira compensation for the ill treatment meted out on him by the police.
He revealed that he was maltreated after he reported a case of armed robbery to the police.
The police counsel, Abisagbo however prayed the panel to allow him present a witness at the next adjourned date, February 24, 2021.
Meanwhile, 10 petitions on looting, vandalisation and destruction of property during the EndSARS protests were heard and closed at the sitting of the panel yesterday.
The petition by Ologun Dele was adjourned till February 26 due to his absence