How to put an end to domestic violence 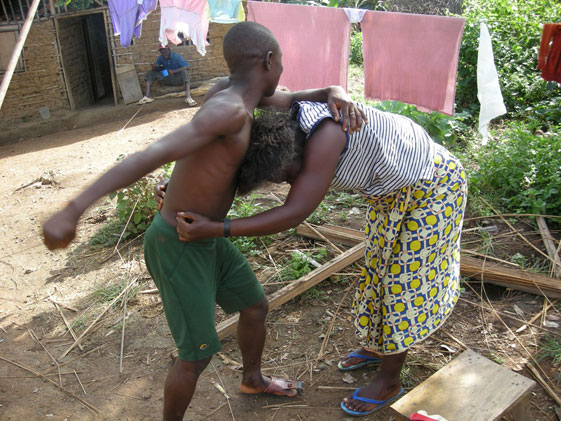 By Jubril Bada
|
The spate of killings among Nigerians over minor arguments is becoming alarming.

In the course of disagreements, people beat one another with objects or engage in fisticuffs that would lead to death.

This happens regularly either between two lovers, friends, business partners, schoolmates, landlord and tenant or co-tenants.

This may be attributed to the fact that capital punishment is not regularly carried out by the Nigeria government on those found culpable of indiscriminate killing of others. Many have been sentenced to death without being executed.

Last week, there was the alleged killing of one Mrs.Beatrice Lajuwomi by a farmer, Segun Daniel who punched after which she fell down and died.

Daniel, who is a Son In-law to the deceased allegedly killed his lover’s mother at a farm settlement in Igbotako, in the Okitipupa Local Government Area of Ondo State.

It was learnt that the 29-year-old farmer had a heated argument with the 42-year-old woman over the custody of his child, who was said to have been living with the deceased.

A source revealed it that Beatrice’s daughter, Olamiotan Lajuwomi had a child for the suspect but they were not living together as husband and wife.

Olamiotan and the child, the source said, were living with Beatrice in the farm settlement.

The source, who explained that there had always been altercations between the suspect and the family of the deceased over the custody the child revealed that the suspect was not pleased that the child was not living with him

It was gathered that the suspect had always insisted that the child should be with him.

According to the source “ On the fateful day (Saturday), he went to the house of the deceased where his lover and his child were living, and wanted to take his child from the woman but he was not allowed.

“This lead to an argument between him and the woman and fisticuffs later ensued.

“Daniel gave the woman some punches and she collapsed and died shortly after.”

After Beatrice collapsed, the suspect was said to have fled the area.

The Police Public Relations Officer in the state, Mr Femi Joseph, confirmed the incident and said the command had launched a manhunt for the suspect while investigation was ongoing.

Late last year, a 34-year-old bricklayer,identified as Akinyemi Edgar, was declared wanted by the Lagos State Police Command for allegedly killing his wife, Ajoke, in the Mowo, Badagry area of Lagos State.

It was learnt that the suspect beat the 28-year-old to death during a disagreement at their home and dragged her corpse on the ground to a place near the community well, where he buried her.

It was gathered that the marriage had been not enjoyed peace.

Neighbours were said to have been frequently called in to settle disagreements between the couple until tragedy struck.

A source told newsmen that the victim might have been killed over her plan to travel overseas in earlier this year.

He said, “The couple have been married for some time now and they have three children together. I cannot explain how they met and married because while the man is a bricklayer, the wife was a graduate.

” They had been having a series of domestic problems and neighbours were always called in to resolve their fights. In fact, the quarrel got so critical that the woman’s family advised her to separate from him because they were not compatible, but she refused.

“Late last year, she announced that she would be travelling abroad in January and the man became annoyed and vowed to end her life. On December 14, 2017, they had their usual disagreement and the man beat her to death. Ostensibly to deceive law enforcement agents from linking the death to him, he dragged her corpse far from their house and buried it beside a well. The corpse was later exhumed and the police were informed.”

It was  learnt that the suspect had fled the house just as the case was transferred from the Morogbo Police Division to the command headquarters, Ikeja.

In an interview with The Hope, a security agent, who spoke in anonymity, explained that it is a fact that the domestic killings are on rise on, noting that the it has claimed a lot of lives.

He said daily people are being killed over argument or fight.

He advised people to not to take the law into their hands and control their tempers, saying this is solution.

Also, a married woman, Mrs. Solape Moyegun, said the domestic killings are rampant among couples over minor issues that could be resolved amicably.

Moyegun, who described indiscriminate killings as cruelty, called for capital punishment on whoever is found culpable in such dastardly act killing others.

She also advised people to report to security agencies to help in resolving their differences rather to take law into their hands.