‘I am not in music for money’ 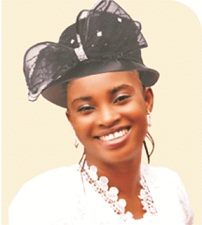 ‘I am not in music for money’

By Kolawole Bamidele
|
A Nigerian gospel artiste, Oyindamola Runsewe-Abitogun, popularly known as El-Olam has said that her aim is to use her music to proclaim Jesus and also to become a great artiste in the industry.

El-Olam during an interview with Friday Extravaganza said she ventured into music due to the love and passion she has for it, saying it is a mandate from God to go into music.

According to her, she has been singing since when she was 15 years old, but professionally since 15 years, saying God has made her to go far in the journey of her chosen career.

The artiste who hails from Uso in Owo local government area, Ondo State, noted that she experiences happiness whenever she is singing at anytime she invited to minister.

El-Olam stated that she started singing in her church where she was attending then, later join the Youth for Christ and New Breed Family, saying after some years God gave her the full mandate to start her music ministry.

According to her, since then the Lord has been her source of inspiration, saying she cannot do without music.

In her words, the issue of finance and instrumentalist has been her challenges since she has been singing.

“Music runs in my vein, I can sing for hours non stop if I see good instrumentalist, because God is my inspiration and I can do all things through him.”

“My children sing too, so if any of them wish to dabble into music, I will give them all my support to make them succeed in their chosen career.”

“I can rely on music without doing any other job with it, I have not seen my music career as a way of making money, I see it as my ministry and what God gave me and God that gave me  know how to take care for me,” she explained.

She urged upcoming artistes that they should put God first in whatever they do in life and compose songs that will win souls for Christ.