‘I became a graduate from Okada’s proceed’ 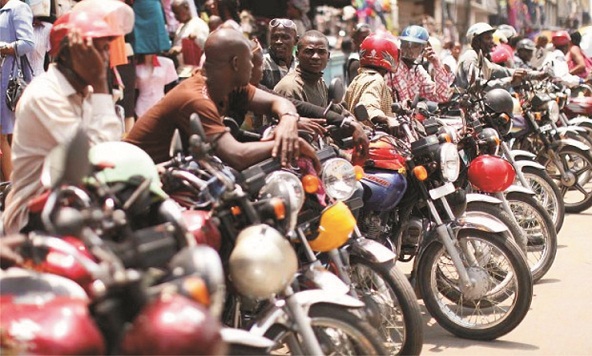 By Agboola Fesobi
|
A 27-year-old man and an indigene of Ado Ekiti in Ekiti state, Mr Temitope Oluwaseun, took to commercial motorcycling business popularly known as “okada” when he lost his father.

After he started the business, he has used the proceeds to sponsor his education, rather than beg for money or be used by politicians for thuggery.

He said: “Today I can boast that I am a graduate from National Open University, Akure chapter. I studied Environmental Science and Resources Management for period of four years with proceeds from ‘okada’.”

According to Temitope, he lost his father when he was in 100 level at the university. His mother, a petty trader, was not able to feed the entire family from that, so he chose not to disturb his mother about his education and buckled up.

When he discovered that jobs like being a sales boy attracts between N5000-N8000 salary per month, he realised that it is would be grossly inadequate for meet his needs, which was why he took to “okada” business.

Oluwaseun said that before he started his university education, he has been involved in “okada” riding but not fully. And said that he has been doing it now for seven years.

“While I was schooling, I did not have my own ‘okada’ but afterwards I have bought three and people are bringing returns to me here in Akure”, he said.

“I am not married. So, after buying fuel and paying for the daily tickets, I usually make around three to four thousand naira daily. Though unlike some others, I don’t take alcohol or hard drugs for the job.

“During raining or dry season, in order to protect myself from the harsh weather condition, each time I want to leave home in the morning, I wear warm clothes and in the dry season when the sun is high, I go home and resume back to work in the evening.

He explained that since new motorcycles in the country are expensive, the business is not necessarily for the “hungry ones” as it is being insinuated but for those who are wise and focused.

For him, a notable thing that happened a few years back was the time it was rumoured that the government wanted to cancel okada business in Ondo state. He said it was as if the ground should open up and swallow him up, because apart from the business, he had no other means of livelihood.

He said the rate at which people engage in the business is very high, even those who learned a trade still go into it because it is a daily money spinning potential.

Another commercial motorcyclist, Mr Femi Adejuwon, who is 47 years old and hails from Ilemeso in Oye Local Government of Ekiti state said he was not educated because his parents did not have the financial wherewithal.

He learned to be a timber lorry mechanic and spent four years practicing after he got a job in a sawmill at Ado, with four thousand naira weekly remuneration attached. But most of the time, the sawmill owner do not pay more than N2000 per week.

“As a result of this, I came to Akure and started riding ‘okada’ and make Return Of N2000 daily until when I met a ‘good Samaritan’ who gave me a motorcycle on hired purchase, for N300,000.

“He was so kind that he asked me to be paying back every month the sum of N27,000 which I have been doing without defaulting.

“After paying the whole money, according to our agreement, the motorcycle will become mine.”

“During raining season, the job is very hectic because sales is usually low, unlike dry season. But since I have no option, I have to accept my fate.

“It is not that as if I am happy doing ‘okada’ business because there are challenges attached to it, and some of it is derived from the customers.

“Some customers will abuse and insult one on the job. In fact there was an experience within Akure metropolis when I carried a passenger around 9pm to Aburoso along Ijoka not knowing he had ulterior motives.

“When I got to his destination, instead of paying me, he entered a house. Then, five men wearing red cloths came out and wanted to grab me, if not for Almighty God I would have been used for ritual,” he stated.

He said if one even looks around, there are many graduates doing the business because there are no job in the society, so rather than engage in nefarious acts capable of destroying his family’s name, he chose to do commercial motorcycle business.

On his own, a 60-year-old man from Enugu, Mr John Chukwu, while narrating his experience in the business, said it was never his wish to engage in motorcycle riding business but said that the situation he found himself called for it.

As a young Igbo man, he was into buying and selling as he owned a shop in Akure selling beans and rice until a few years ago, when thieves came to his shop and packed all his goods.

According to Chukwu, he has five daughters who are in his home state of Enugu, but has lost his wife.

When his goods were all stolen, his “town meeting” in Akure gave him the sum of N150,000 to start the business again but for the fear of the theft being repeated, he said, “I looked around and discovered that the easiest business that does not require much and is not prone to theft is ‘okada’ business.

“I must confess that the business is not easy at all but in order not to constitute a nuisance to the society, I went into it.

“I have been in the business for about five years now and I can tell you that when my first daughter got married, it was Okada money I used to organise it.

“I appeal to the government both at state and federal level to have a scheme that would cater for the older generation,” he said.